Canadian Music Week continued! If you have yet to read the other parts of the Canadian Music Fest coverage you can view them here and here.

This year I wanted everything to be different, told myself not to stress over anything…Yeah, now I am stressing over stupid technolgy not working as it should!  I tried Final Cut Pro on my friends computer a few weeks ago…I wanted to shoot myself in the face, don’t understand why Apple makes the simplest things so time consuming and complicated! After listening to more than half of the bands playing the festival, I concluded that there was nothing new appealing to my ears. Most of the good bands on the Toronto scene I already love, know about, have heard of or don’t like. There were a few Australian and Japanese bands I saw for a few minutes but they were just mediocre.

On March 21st I had a few bands to check but it turned out one of the bands was not even playing, regardless of what the book said. I thought why not just hit up a few clubs on Queen and then reach Incura’s set at the Hard Luck. Absolutely thrilled that I was able to catch their set and I arrived early!! The first time I saw Vancouver band Incura was at the Rivoli in 2009, they were so fantastic I had to check them out again but kept missing the sets in the city. This time I was determined, I even agreed to an interview with dynamo frontman Kyle Gruninger when the bands publicist reached out. To watch the interview click here or go to www.youtube.com/fridaetv.

Incura is:  Kyle Gruninger – Vocals, Royce Whittaker – Guitar,  Jono Olson – Bass, Jim McLaren – Keyboards and Phil Gardner on the kit. You cannot describe their music by genre-boxing them. They have such a fantastically different blend of artistic sounds and if anyone tries to change them that will be a sad day.Kyle is one of the best frontmen I have seen ever! His vocals and stage presence surpass many of the veteran artists out there today, if Freddie Mercury and David Bowie had a son it would be Kyle. You can see him shine by watching the band live or viewing a video on Fridae TV youtube.

The rest of the band did well, Whittaker was immense on the axe but there were a few tuning issues that I heard, but this time I will let it slide because they played four shows back to back in three days. When I notice mistakes at least I know he is actually playing the guitar and not “Rock Banding it” with a backing track pretending to play the instrument. (I have seen that happen far too often these days!). Phil Gardner on the Drums was tight the whole time! Most Drummers I have seen and know are always on top of their game. Bassist Jono Olson kept those Bass lines crisp , he was very energetic and not overly enthusiastic.  They all have chemistry beyond words that you have to see for yourself, keep Incura in your thought because soon enough they will have a huge following!

On Friday March 22nd an interview was scheduled with James Black of Finger Eleven who also has his own solo project and an Alt-Country band “Blackie Jackett Jr.” with fellow guitarist Rick Jackett. You can watch the very informative interview here. Once his set wrapped I was to run down to The Indies but instead I ran into an awesome friend as I was leaving the Rivoli and decided to check the Protest The Hero set at The Hoxton which I have never been too. I did feel a little guilty for fucking up the coverage rotation but I really wanted to see PTH kill it! Fridae TV photographer Dipan was already at The Kool Haus shooting the show, so my guilt wasn’t too overwhelming. The Hoxton looked nice, the sound system was shit up close but farther back it sounded decent, invest in your sound system people. Did not stay too long because it was getting crazy and I didn’t want to miss Matt Mays and El Torpedo I take it and go.

The Indies were held at the Kool Haus this year due to the relocation because of the construction on front street by Union station and the usual CMW HQ Royal York. Next year they should have CMW/CMF at the Sheraton Centre, after all it is a spacious hotel and centrally located. The band playing when I arrived was Diamond Rings…The bands music was good but the singer was horrible, he ruined everything, my ears were screaming! Thankfully, the set was almost over and Matt Mays was hitting the stage next. It is beyond tragic that band member Jay Smith of El Torpedo was died not even a week later. Smith was found dead Wednesday March 27th in his Alberta hotel room, cause of death is yet to be released. He was a strong influence on the band and a very talented musician who left behind a young family. My condolences to all of his family and friends, it is always hard to lose people so suddenly. When people say time will heal, I don’t agree with that saying when it comes to the death of someone close. You never really get over it, you just learn how to cope and live your life.

The band was fantastic they were all so cohesive and I loved the guitars, always a sucker for the sound of a guitar played well. I don’t know why but the more guitars squealing the better for my ears! Mays has a soulful mellow voice and is a fabulous frontman with great stage presence. The crowd was hypnotized by his every move, see for yourself and watch “Loveless” and “Stoned” the two best tracks I filmed of their performance at The Indies. 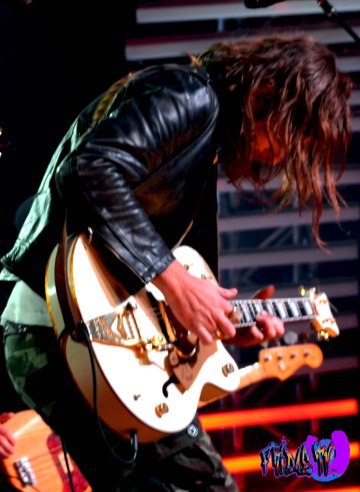 This year CMW had over a thousand bands playing but not enough quality entertainment that I wanted to hear. Always remember it is about quality, not quantity. The headliners for The 2013 Indie Awards were Metric, the crowd was waiting patiently for the first twenty minutes and then they began to get restless because the band was still not on the stage after an hour. 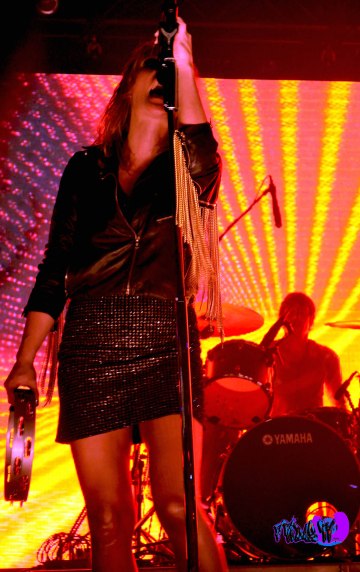 The crowd forgot about the delay the minute vox Emily Haines walked onto the stage. Metric started off their set with Artificial Nocturne, followed by Youth Without You which I absolutely think sounds like “Come As You Are” by Nirvana. There were moments when it seemed as though Haines wasn’t singing, photographer Dipan even notice that, maybe everyone should lay off the vocal effects and sing normally. They were okay, I don’t get the hype but Haines does put on a respectable performance. 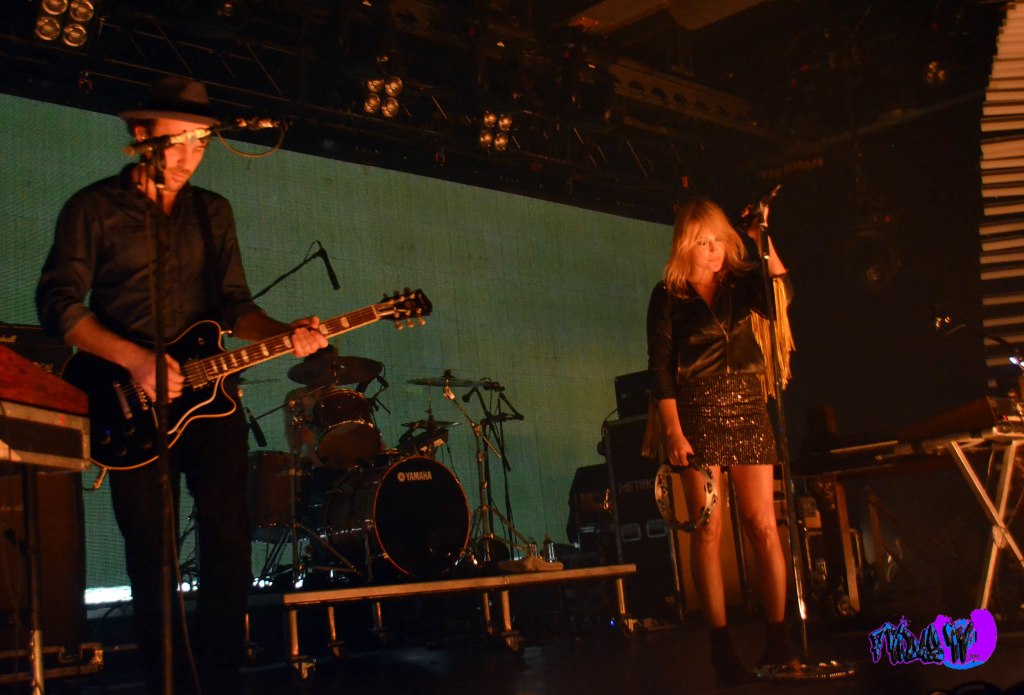 Next!! Six Side Die at Cherry Colas!! Prior to their set I was on a mission to find a good band! So I trekked up and down Queen street in search of new quality entertainment. Most of the good bands I have already seen and like the days before the bands playing were not mesmerizing enough to keep me. I did a new interview with Six Side Die but it is still being edited, like Kyle’s it was to be right here for you all to see but I don’t always get what I want. 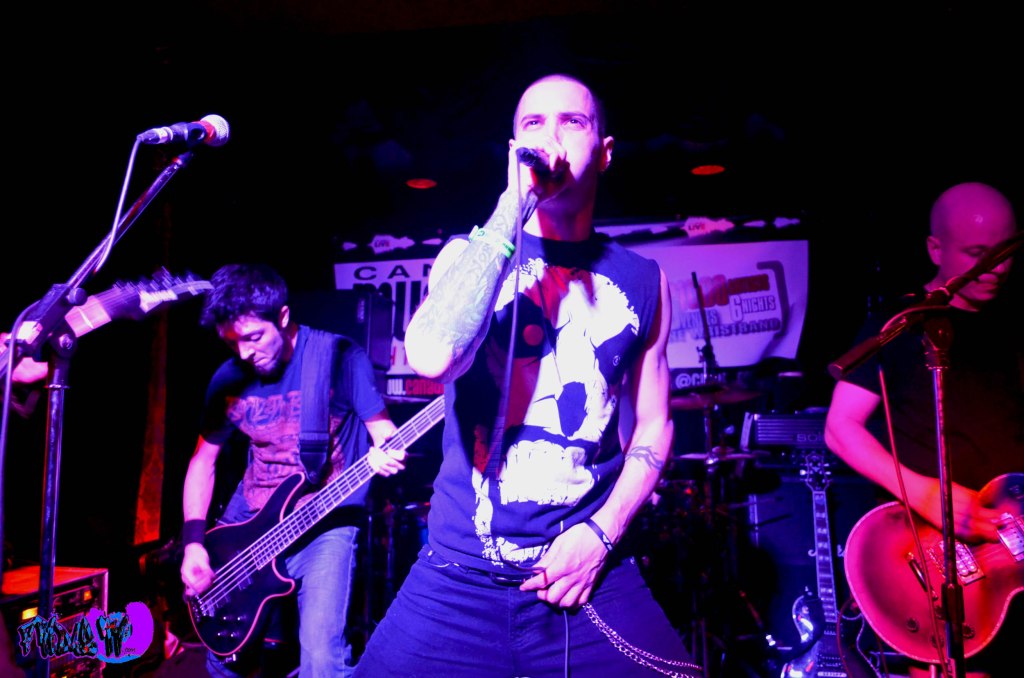 Six Side Die is in the process of recording their debut record “That F’N Album” which should be out this summer for everyone to listen to. SSD’s fans raised enough funds for the band to make the record possible. Many people know frontman Bryan Crouch from his previous band “Hail The Villain” and I have noticed by the comments left on a few FridaeTV videos some of his Villain fans are not happy with the migration. People don’t understand how harsh hard rock vocals are on your chords, all of the screaming and growling damages the vocal chords causing them to deteriorate because of continual misuse. There are so many metal and hard rock bands that have had to hold off on tours because the vocalist needed some voice rest or had to get legit surgery to try and repair some of the affliction. Honestly people need to get over it and move the fuck on, he is a talented guy who wants to continue evolving as an artist on his own terms. If you don’t love it anymore, you have to let it go to truly find what you are missing because in the end the only one watching out for you is you.

They rocked Cherry Cola’s “Tiny Tim” stage to the fullest of their ability, it was so hard to get photos of everyone because there are five Larries on a tiny stage at once overlapping one another. Six Side Die is: Bryan Crouch – Vocals, Anthony Xander – Lead Axe, Kelly Voelkel- Drums, Mike Liske – Rhythm Guitar/Vox and Pat Kavanagh- Bass/Vocals. 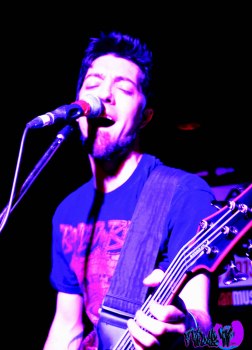 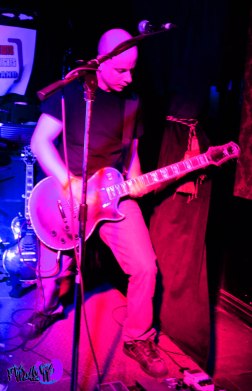 I love Pat’s has screamage skills he sounds fantastic and plays bass pretty well keeping the moment up. Mike on the rhythm needs to relax a little bit, have fun on stage! The hardest was getting shots of Kelly he was always blocked by a Larry but shit I managed one still. Loving their sound, very eclectic and Bryan still kills it as a frontman, he brings the vibrancy needed to make this new venture a successful endeavour. It’s amazing how the band interacts with their fans on the regular either by doing random fb or twitter updates or playing video-games with them. Xander is great guitarist, he tried to do some tricks with a bottle…Didn’t exactly work but at least he tried something different. People are too afraid of risks and change but if you don’t take a chance on something you are not living. Check out all of the above bands and artists as well as the others mentioned in the previous CMW editorials and keep it locked for those interviews, that’s all for this year!