A very sad emotional moment for all of Heavy Metal yesterday, as news spread like wild fire that legendary Ozzy replacement Ronnie James Dio had succumb to his battle with stomach cancer. Dio broke the  news about his Cancer last summer fresh off a tour with his band “Heaven and Hell”. The band’s myspace has yet to be updated, completely understandable they just lost the heart of the band a friend and brother. RJD will be remembered as one of the greatest metal vocalists of our time. My condolences to his family and friends.

(CP) — Ronnie James Dio, whose soaring vocals, poetic lyrics and mythic tales of a never-ending struggle between good and evil broke new ground in heavy metal.  Dio rose to fame in 1975 as the first lead singer of Rainbow, the heavy metal band put together by guitarist Ritchie Blackmore, who had just quit Deep Purple. Dio then replaced legendary vocalist Ozzy Osbourne in Black Sabbath in 1980 with the critically acclaimed album Heaven And Hell, considered by many critics to be one of the finest heavy metal albums of all time. His on-again, off-again tenure with Black Sabbath touched off an intense debate among fans as to which singer was the true essence of the band — a discussion that lasted until his death. 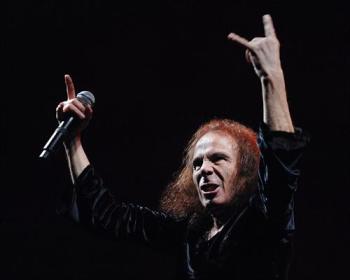 He also enjoyed a successful solo career with his self-titled band, Dio, in between his three stints with Black Sabbath (1980-82; 1992; and 2007-2009), when the band toured as Heaven And Hell, to differentiate it from Osbourne-led versions of Sabbath. Many of his most memorable songs revolved around the struggle between good and evil and he also drew heavily on medieval imagery in songs like Neon Knights, Killing The Dragon and Stargazer.

“He possessed one of the greatest voices in all of heavy metal, and had a heart to match it,” said Twisted Sister guitarist Jay French, whose band toured with Dio since 1983, and was to do so again this summer at European rock festivals. “He was the nicest, classiest person you would ever want to meet.”

His solo hits included Rainbow In The Dark, The Last In Line and Holy Diver 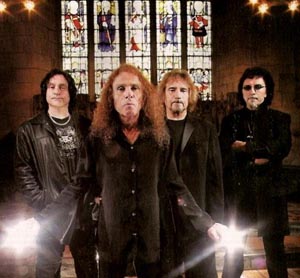