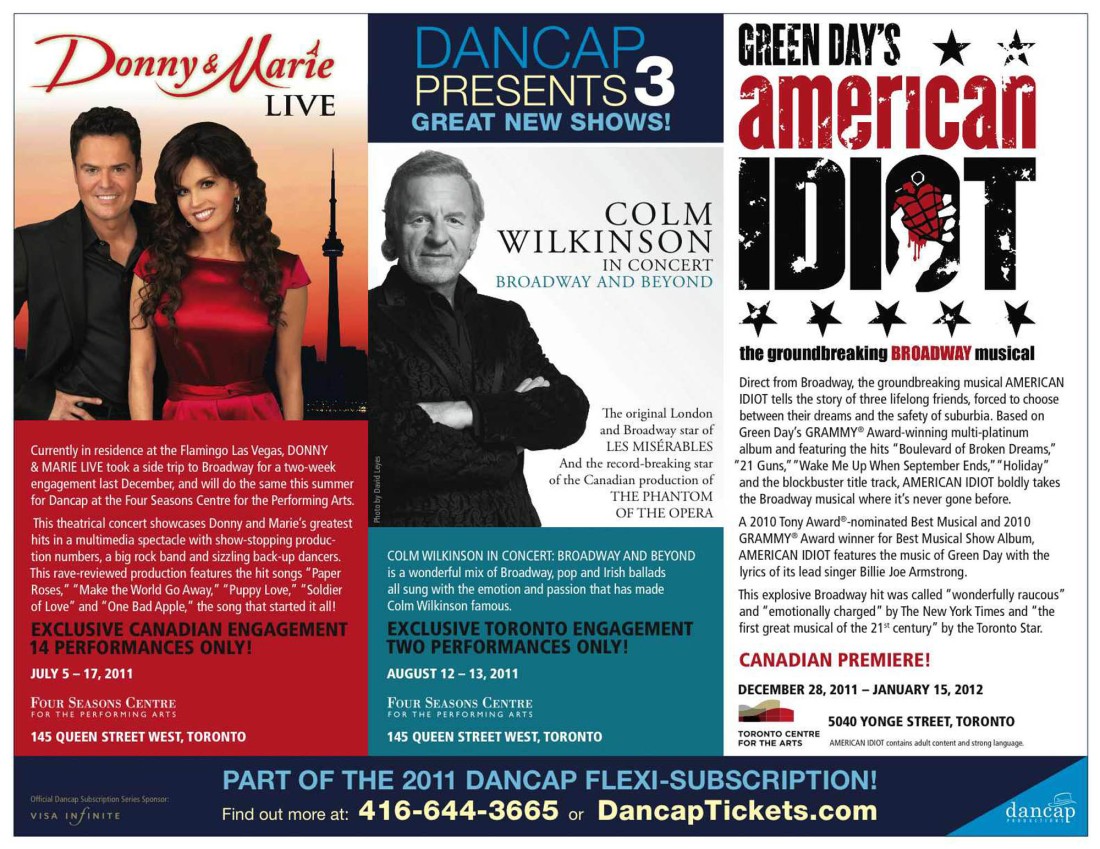 And a new way to buy tickets with Flexi-Subscriptions

Dancap Productions added two new shows to their 2011 line-up at the Four Seasons Centre for the Performing Arts: DONNY & MARIE and COLM WILKINSON IN CONCERT: BROADWAY AND BEYOND; and one new show at the Toronto Centre for the Arts, the explosive Broadway musical GREEN DAY’S AMERICAN IDIOT.

“Dancap Productions is constantly seeking out the newest and most interesting theatrical experiences for Toronto audiences,” states Aubrey Dan, President of Dancap Productions, “and we are committed to providing the most flexible customer service options available as part of our endless season of programming!”

Currently in residence at the Flamingo Las Vegas, DONNY & MARIE took a side trip to Broadway for a two-week run last December, and will do the same this summer for Dancap Productions at the Four Seasons Centre for the Performing Arts.

This theatrical concert, which marks the first time the duo have performed live together in almost 30 years, showcases Donny and Marie’s greatest hits including “Paper Roses,” “Puppy Love,” “Go away Little Girl,” and others, in a rave-reviewed multi-media spectacle with a big rock band and show-stopping production numbers, audience interaction, and the trademark teasing between siblings.

Making their Toronto debut as the world’s favourite brother and sister singing team, Donny Osmond spent much of the 90s in Toronto (and on tour) performing the role of Joseph in the
mega-successful Canadian production of Joseph and the Amazing Technicolor® Dreamcoat.

“Donny and Marie are the real deal! They are extraordinarily talented, and having worked in show business their entire lives, they are consummate professionals,” stated Peter Lamb, Dancap Producer & Executive Vice President, at today’s press announcement.

“It was a total pleasure working with Donny on the Toronto production of Joseph.  Reaching out to Donny was one of the first things I did when I began working at Dancap Productions. I am thrilled that we will be presenting Donny and Marie for the first time together on a Toronto stage!”

DONNY & MARIE will play the Four Seasons Centre for the Performing Arts from July 5 – 17. Tickets go on sale to current subscribers and for groups of 12+ on March 8.  Tickets will be available for new subscribers as part of Dancap’s FLEXI-Subscription as of March 14.

A celebrated star in Canada, on Broadway and in London’s West End, Colm Wilkinson has spent many years on the stage mesmerizing audiences with his starring roles in international productions of Les Misérables and The Phantom of the Opera. This Dancap presentation of COLM WILKINSON IN CONCERT: BROADWAY AND BEYOND will coincide with the North American release of his new album, Broadway And Beyond The Concert Songs, and will feature such signature songs as “The Music of the Night,” “Bring Him Home,” and “Danny Boy.” Wilkinson achieved international fame when he created the role of Jean Valjean in the hit musical Les Misérables with The Royal Shakespeare Company.  He played the part in London’s West End, on Broadway, and in the now legendary London 10th Anniversary Concert. Wilkinson also created the role of the Phantom for Andrew Lloyd Webber at the Sydmonton Festival in 1986.  He went on to star in the Toronto production of The Phantom of the Opera for four and a half years, performing the part over 1,650 times and for 3.5 million theatre-goers.  Wilkinson is a two-time Dora Award winner: he won his first Dora in 1990 for his portrayal of the Phantom, and once again in 1998 when he returned to Toronto to perform Jean Valjean in Les Misérables; for which he also won the Helen Hayes Award, The Outer Critics Award and The World Theatre Award.
Colm Wilkinson will come home this summer, and perform COLM WILKINSON IN CONCERT: BROADWAY AND BEYOND for two performances only, August 12 & 13 at the Four Seasons Centre for the Performing Arts. Tickets go on sale to current subscribers and for groups of 12+ on March 8. Tickets will be available for new subscribers as part of Dancap’s FLEXI-Subscription as of March 14.

Direct from Broadway, the smash-hit musical AMERICAN IDIOT tells the story of three lifelong friends, forced to choose between their dreams and the safety of suburbia. Based on Green Day’s GRAMMY® Award-winning multi-platinum album and featuring the hits “Boulevard of Broken Dreams,” “21 Guns,” “Wake Me Up When September Ends,” “Holiday” and the blockbuster title track, AMERICAN IDIOT boldly takes the Broadway musical where it’s never gone before. With direction by Michael Mayer (Spring Awakening) winner of the 2010 Drama Desk Award for Outstanding Director of a Musical, choreography by Steven Hoggett (Black Watch), orchestrations and arrangements Tom Kitt (Next to Normal), and Tony Award-winning Scenic Design by Christine Jones and Lighting Design by Kevin Adams, AMERICAN IDIOT is an experience Charles Isherwood of The New York Times declares “thrilling, emotionally charged, and as moving as any Broadway musical I’ve seen this year!”

Toronto will also be one of four locations, and the only Canadian city, where open auditions will be held (March 26) for the National Tour of AMERICAN IDIOT.  For details visit http://www.facebook.com/americanidiotbroadway

AMERICAN IDIOT will rock the Toronto Centre for the Arts December 28, 2011 – January 15, 2012. Tickets go on sale to current subscribers and for groups of 12+ on March 8.  Tickets will be available for new subscribers as part of Dancap’s FLEXI-Subscription as of March 14.

With the introduction of the new and innovative FLEXI-Subscription, Dancap Productions is offering the convenience and cost savings of buying a minimum of three shows in advance of a general
on-sale, access to the best seats in the theatre, and helpful email reminders prior to the show.

Also available as part of the new Flexi-Subscriptions are previously announced shows; 9 TO 5: THE MUSICAL, NEXT TO NORMAL, COME FLY AWAY, THE ADDAMS FAMILY and MEMPHIS, as well as the new additions of DONNY & MARIE, COLM WILKINSON IN CONCERT: BROADWAY AND BEYOND and AMERICAN IDIOT.

Dancap is pleased to partner with Visa Infinite as an official sponsor of its 2011 Subscription Series. Visa Infinite cardholders receive priority access to some of the best seats in the theatre for Dancap Flexi-Subscriptions. Use a Visa Infinite card to purchase with Dancap’s dedicated telephone line 416.590.0843, or online at http://www.DancapTickets.com/VisaInfinite.

Launched in 2007 by Aubrey Dan, Dancap Productions Inc. is a Tony Award®-winning commercial theatre company based in Toronto, and dedicated to producing and presenting the Best of Broadway-style theatre created in collaboration with acclaimed artists and award-winning creative teams. Current Broadway shows with producing and investment credits include: The Addams Family, Memphis and Jersey Boys. Past Broadway and international credits include: Wicked, Come Fly Away, Tom Stoppard’s Rock ‘n’ Roll, [Title of Show], Cat on a Hot Tin Roof, West Side Story, A Little Night Music, In The Heights and Jersey Boys: the First National Tour, productions in Las Vegas, the West End, Sydney and the recent record-breaking run in Toronto. www.DancapTickets.com

COLM WILKINSON IN CONCERT: BROADWAY AND BEYOND

For more information or to book a FLEXI-SUBSCRIPTION by telephone, call 416.644.3665

Some conditions apply. Prices include HST and service charges. All sales are final.

All productions, pricing, dates, casts and locations are subject to change.