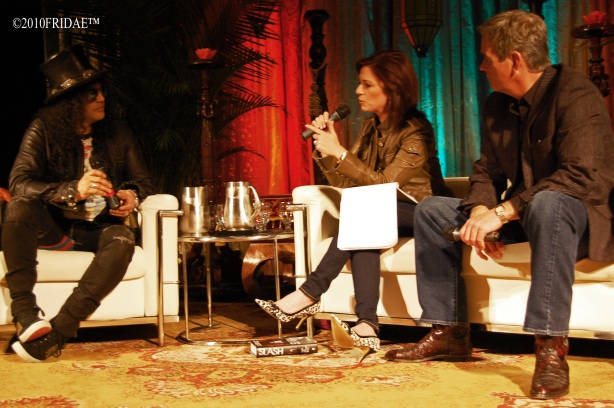 SLASH ADDED TO LINE-UP OF SPEAKERS

TORONTO – January 30, 2012 – After an overwhelming appearance at CMW in 2010 and a platinum-selling self-titled album in Canada immediately thereafter, Slash will be returning to this years’ Slacker Canadian Music Week to participate in a celebrity interview on Friday, March 23 at the Fairmont Royal York Hotel before a sold-out performance later that evening at The Phoenix Concert Theatre.

His career originated as guitarist for the iconic rock band Guns N’ Roses and has evolved on his own with Slash’s Snakepit, Velvet Revolver and now his solo efforts. His tours have taken him around the globe more times than most and have seen him perform hundreds of shows in front of thousands of fans – each one with its own tale to tell.

In a command interview with media personalities John Roberts (Fox News Senior National Correspondent) and Kyra Phillips (CNN Newsroom anchor), attendees will have an intimate opportunity to hear Slash address the virtues of touring, the impact of live performance and fan engagement, recount some of his most memorable moments from the road, as well as reveal the details of his sophomore solo album set to release in May 2012.

To see Slash in this exclusive setting, please visit www.cmw.net to register as a delegate or purchase a limited ticket to this individual event.