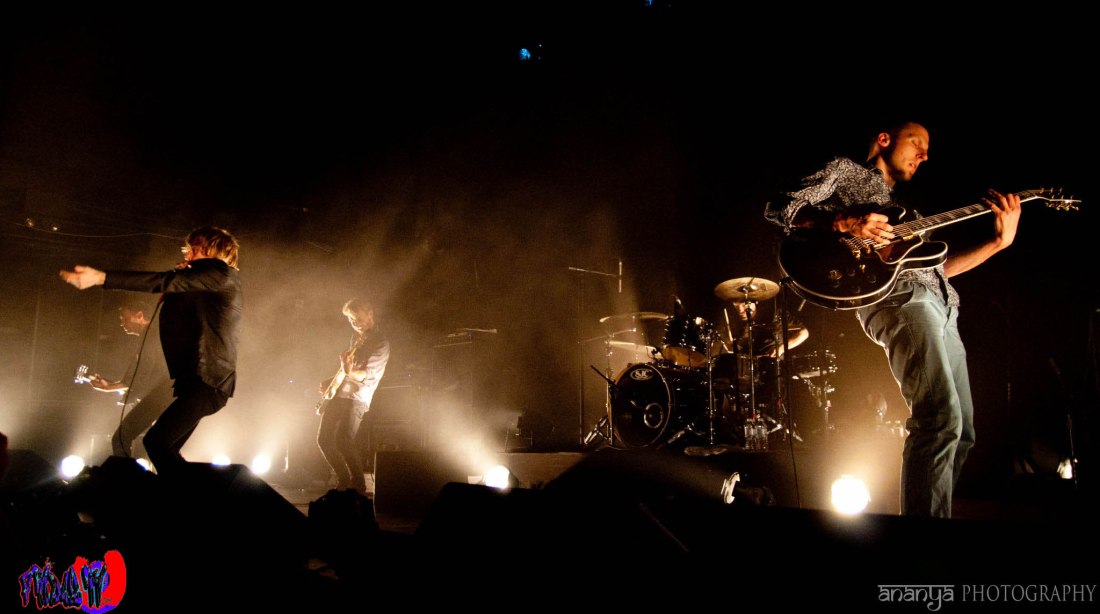 It has been fourteen years since Swedish Punk band Refused hit the road together. They dropped one last record “The Shape Of Punk To Come” in 1998 and called it quits. Recently, the band reunited to do a tour hitting up various venues across the globe, one of those stops was Toronto for two nights at The Sound Academy.

We hit up the July 23rdshow, it was packed but not sold out like the previous evening for the first show. The venue filled up nicely and the crowd was fantastic. As a bonus we saw some cool lightning action by the water as we waited for the bands to start. There were a few people I recognized at the show; it was good to see familiar faces. I was texting by the pit entrance waiting for OFF! to hit the stage as the security guard excitedly pointed out a member from Billy Talent as he passed us by, it’s always awesome to see male security guards teenie out! OFF’s set began at about 9:30 and they played until approximately 10:15. I have never heard of OFF! before so this was intriguing to me, I always like to see fresh bands because it leaves me curious to see how they sound without anyone’s opinions trying to cloud my ears.

OFF is a Hardcore punk band from Los Angeles, the band formed in 2009 known to be a supergroup of sorts and consists of; Keith Morris – Vocals (Black Flag, Circle Jerks), Dimitri Coats – Guitar (Burning Brides), Steven McDonald – Bass (Redd Kross) and Mario Rubalcaba – Drums (Hot Snakes/Earthless/Rocket From The Crypt).

The tracks were so short and the vocal mic didn’t have the greatest levels to start, eventually the sound evened out but it really didn’t matter, my three tracks were over. The guitar sounded amazing but was drowning out frontman Keith Morris’ vocals. The band had great energy and I was enjoying their performance but was getting restless because Morris talked longer than he sang, it was boring me. I wandered off to the patio for a smoke, I could still hear the band which was fabulous and could watch the set at the bar on a flat screen TV. The Sound Academy is a fantastic venue, it’s only hindrance is the lack of TTC access.

Set time for Refused was eleven but they rocked the stage earlier than expected. They had this big reveal before the first tune so we had to wait until it was dropped and put away. This was nothing new for me, many bands I have covered do this and of course I don’t mind, everything is for the fans. They were so excited and loving every second of Refused being on that stage. I always try my best not to get in the fans way because they just want to enjoy their favorite band live without big heads in the pit for the whole set. I understand why the three track rule exists but it would be smart to have media do songs 4, 5 and 6, because with most sets the kinks are usually worked out by then. The only artist I have ever covered that has had media shoot songs 4, 5 and 6 instead of the first three was Rapper Nas, very bright on his team’s part.

Refused started in with Worms Of The Senses / Faculties Of The Skull, I wish I could have filmed the reveal but we had to wait. If it weren’t for the fans I wouldn’t have been able to film Liberation Frequency because security thought the three tracks were already over until the fans confirmed they only played two, thank you! They thought the long intro and first two songs were it, many security guards make that mistake and that lack of communication gets very annoying. Thank you so much to AEG/Goldenvoice Canada and new Fridae TV photographer Dipan for taking some cool shots. You can watch the mentioned songs by clicking the title links and can find more photos here.

These extremely enthused and energetic Swedes put on a spectacularly entertaining show, frontman Lyxzén was flying all over the place doing his thing. By the end of the set he was topless, it was a scorcher that day and he first came out in a suit. The band was so impeccably crisp, I loved how the guitars sounded, very clean with a few crazy riffs. The only thing I have to say is the  rest of the band needsto match the singers vitality. They seemed a little delayed at first but once they warmed up they got into it a little more . It is hard to be the lead, many artistic performers are shy and others love to soak up all the attention. What I have come to notice is the shyer modest artists are usually the extremely talented, unlike the majority of the “Artists” that crave all the attention and boast profusely about how gloriously amazing they are. When on stage everyone gets nervous, unless you are bored with your job or intoxicated to the point where the whole audience looks like DeadMau5 you get nervous.

The trick is to act, create a character or stage persona to help you be who you want to be on that stage, it makes it so much easier to calm and control the nerves. But having a different persona on stage can come with a price for many artists. For some, after a few tours they cannot find their true self becoming lost in the world they have created. And the lines between fantasy and reality are so blurred they can’t tell the difference anymore.

As the band played on I was pleasantly surprised at how good they were, I have never in my life seen them perform and had only heard a few of their songs. Vocals were stellar, I did not hear him go flat once during the fifteen track set which is extremely rare for a live show. What I liked about this Swedish punk band is their music had melodies and guitar solos, it was not all yelling and auto-tuned pop hooks. The songs have a creative trance like ambiance with a solid structure that draws you in. Refused put on one of the best shows I have seen this year and they didn’t need to use any pyrotechnics to make that possible. They ended off the last Toronto set with encores “New Noise” and “Tannhäuser / Derive”. If you are a punk fan and you have the opportunity to see this band live, I suggest you take that chance before it ends, who knows if anyone will ever see Refused rock the stage again.