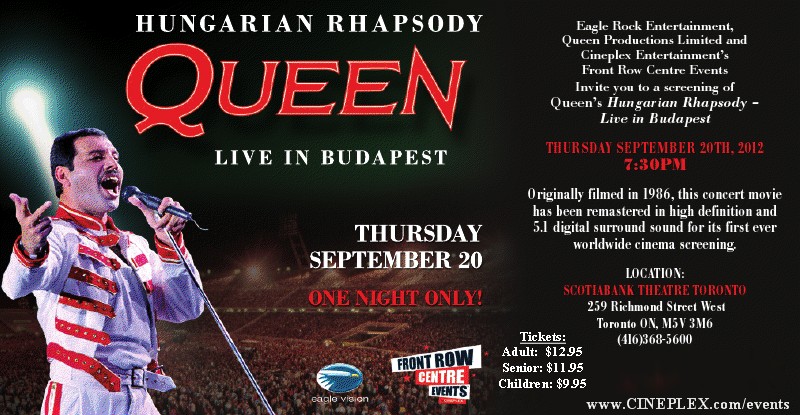 Three years before the fall of the Berlin Wall, Queen staged the first Western rock concert in a stadium behind the Iron Curtain with 80,000 fans watching. This was the largest ever show in Népstadion, Budapest. In addition to such favourites as “Bohemian Rhapsody”, “Crazy Little Thing Called Love”, “I Want To Break Free”, and “We Are The Champions”, the film will also feature some never-before-seen archive footage of the band at rehearsals, interviews and on the road. The fascinating mini documentary will lead into the astounding concert movie with snippets and highlights from the band during the year leading up to one of their most significant performances.

The first 200 people to arrive at the Scotiabank Theatre on September 20th for this event will receive a Queen gift bag with a theatrical poster and a selection of Queen DVDs.

The film will be playing at various participating Cineplex theatres. Tickets are available at participating theatre box offices and online at cineplex.com/events. A complete list of participating theatres and showtimes is also available online. Eagle Rock Entertainment will release Hungarian Rhapsody: Live in Budapest on November 6th, 2012 on DVD, Blu-ray, digital video, DVD/CD, and Blu-ray/CD.

CONTEST INFORMATION: Thanks to the amazing folks at Cineplex and Eagle Rock I have a pair of tickets for the screening to giveaway! Email me your favorite Queen song, no purchase necessary contest ends 11:59pm Tuesday September 18th. Winner will be chosen randomly and announced Wednesday September 19th. Email your answer with “Queen” in subject line along with contact information to info@fridaetv.ca Good Luck!