Yes, it’s time to let the world read this editorial, that’s just me reassuring my O.C.D perfectionist self to let it go. Not the first time Collie Buddz brought the fiyah to Toronto and probably not the last! Good music and talented artists always get repeated coverage from me because it’s so rare to find these days. Collie Buddz (Colin Harper) new school Dancehall, Reggae, Soca artist hit Toronto’s Danforth Music Hall on his “Light It Up Tour” with support from Miami’s Cris Cab and Brooklyn’s New Kingston. Unlike many publications I don’t care about covering bands/artists that will give me a million new views and fans, I like introducing people to the good ones, new and old. Quality is very important because my ears don’t hear numbers but music is heard clearly. If I were to cover all of the mainstream crap everyone else does, I would be working at Much Music like everyone else instead of running my own budding media empire. 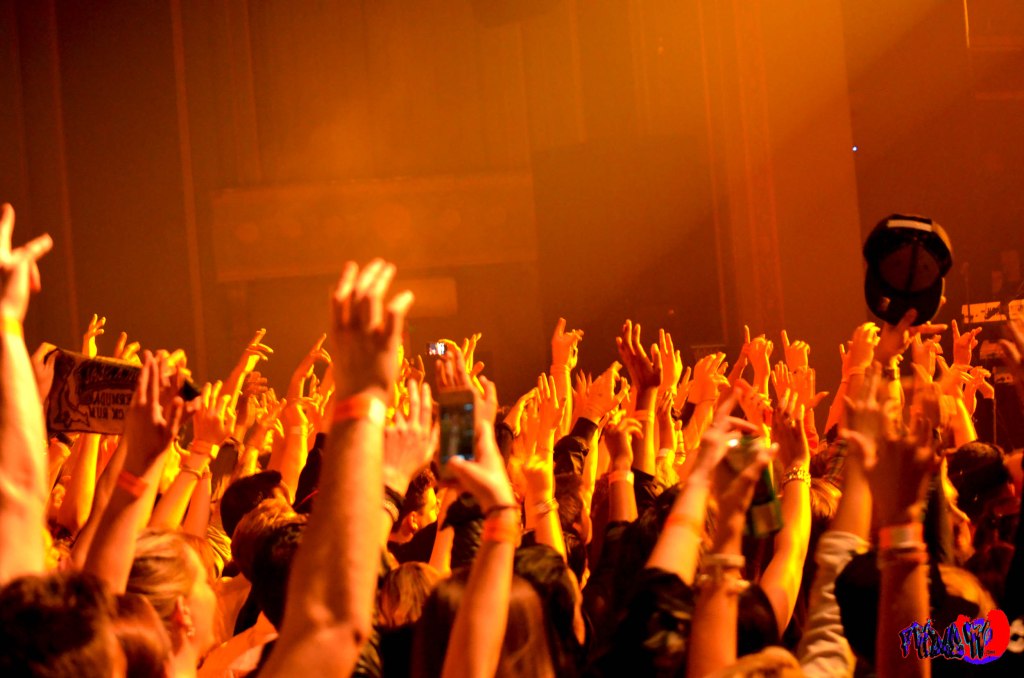 The Danforth Music Hall has been a part of East Toronto history since 1919 and was even shut down a few times since, most recently for a year and a half until it was resurrected in 2011. Come to think of it, this venue is where I saw my first ever live concert performance, a Greek Singer my Mom took me to see back in the late eighties. The Danforth is a neighbourhood in Toronto known as “Greek Town” by non Greeks and is always fun to wander, I partly grew up on that strip from Greenwood to Pape.

Back to present day, I was hoping to make it on time for the first band New Kingston and I did! Finally I saw their full set! Well, kind of…I missed one song but did get a few good shots from the pit, they actually had a pit! Very surprised and excited when I saw the pit because I was ready for a general admission, no pit shoot from the crowd event, so I came prepped with different lenses. No complaints here, this show ended up being my favorite of the year thus far! New Kingston is a band of brothers with a “Fathager” (Father & Manager) Courtney Panton Sr. who also plays the Bass in the band. Brooklyn, NY is where they:  Tahir Panton – Vocals/Keys, Stephen Suckarie – Vocals/Guitar and Courtney Panton Jr. – Vocals/Drums) are from. They have two records available for you to hear “Kingston University” and “In The Streets“. You can usually find them on tour with Harper (they are also his backup band), it is pretty fantastic that they get to kick off the night with their own material. I remember last year, they had a set in the city without Buddz that I wanted to cover but I had another show and all my photographers were booked. It’s hard to be five places at once, unless you can freeze time or fly which unfortunately I have yet to learn how to do. 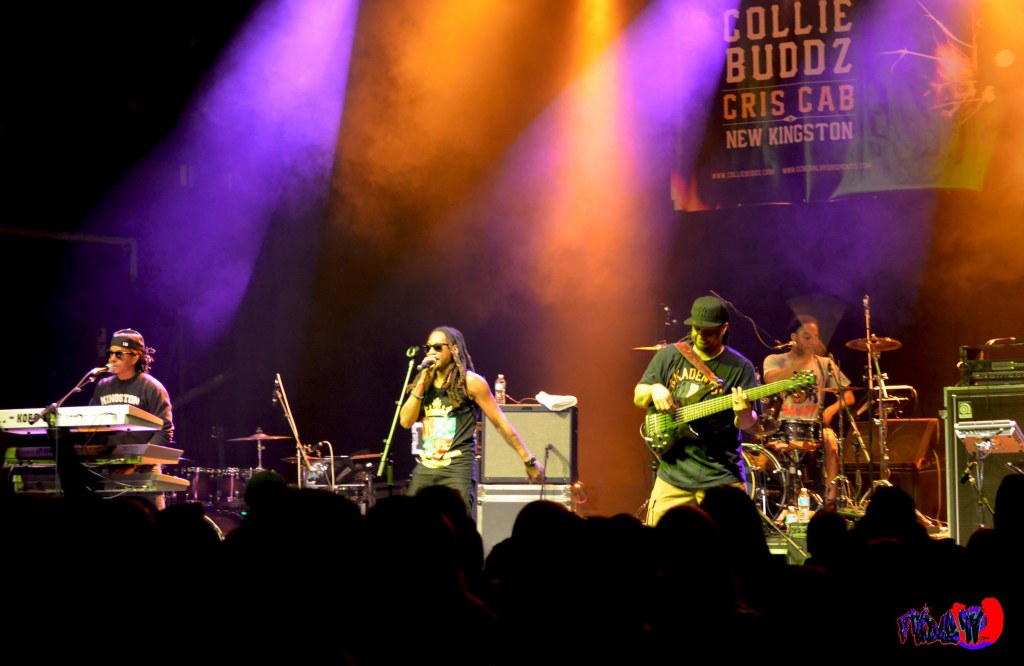 The band was vibing it out, still I felt like they were not fully comfortable on stage but did warm up and let loose by the end of the set. Drummer/Singer Courtney Panton Jr. migrated from behind his drum kit, took off his shirt and sang for the people of Toronto. The females were loving every minute of the shirt removal and I noticed every time I wandered to different areas of the venue the crowd was growing quickly. New Kingston has this one tune with a sick beat that I have heard before but never know the name of the tune because they don’t introduce all the songs. Advice for all newbies: introduce your songs to the crowd if you want people to actually remember them and check out your music. Tahir was a lot more enthusiastic, he even smiled a few times as he was rocking a portable keyboard instead of being so serious all the time. Steve did a commendable job entertaining the crowd but he could talk to them a bit more. They need to separate themselves from being the backup band and embody more of a headlining act attitude with every performance. They also need to work on tightening up those harmonies, they were pitchy in a few songs but overall well done, I would see them again for sure. 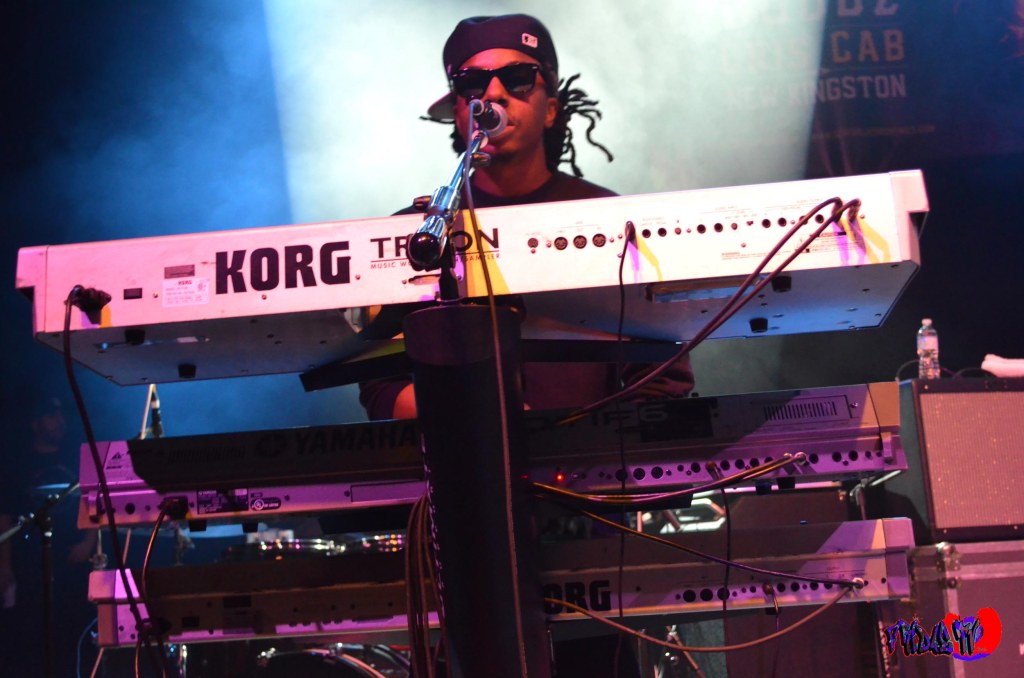 The next artist to heat the stage was Cris Cab, he is new to my ears, I have never heard of him or his music but quite a few people in the crowd seemed to be familiar with him. There were plenty of different age groups, couples and of course the hard core Collie Buddz fans keeping their space hostage at the front of the barricade. Cris Cab is from Miami, Florida and like many people from Miami he has Cuban roots. Cuba is such a beautiful country and my heart aches for the people who live there, prisoners of paradise.

The crowd cheered Cab on as he was jamming out with his band, strumming a few tunes on the acoustic himself. Not bad for a young Larry, a little work is still needed here and there but he already has swagger and a presence about him. Cris was working the stage and a crowd like a seasoned veteran and looks absolutely natural! Truly coming from his heart you could see how much he loves being on the stage, I could tell he was nervous but had it under control almost immediately. He just released the Red Road Mixtape which you can grab here. Cris was discovered by Pharrell Williams and was signed to Mercury/Island Def Jam in 2011, one thing I know is Pharrell is right, this kid is the future.

The headliner for the evening Collie (Colin Harper) Buddz was up next! The crowd was more than ready chanting his stage name “Collie Buddz!”, “Collie Buddz!”. Once the house music stopped and the band started to jam the packed venue erupted into cheers of excitement for their favorite Reggae artist. The girls were going nuts, I avoided the area he was performing right in front of because the fans were getting grabby and “Too Watchy” (laughs). I really didn’t feel like having a chunk of my hair pulled out or my head whacked by hands. 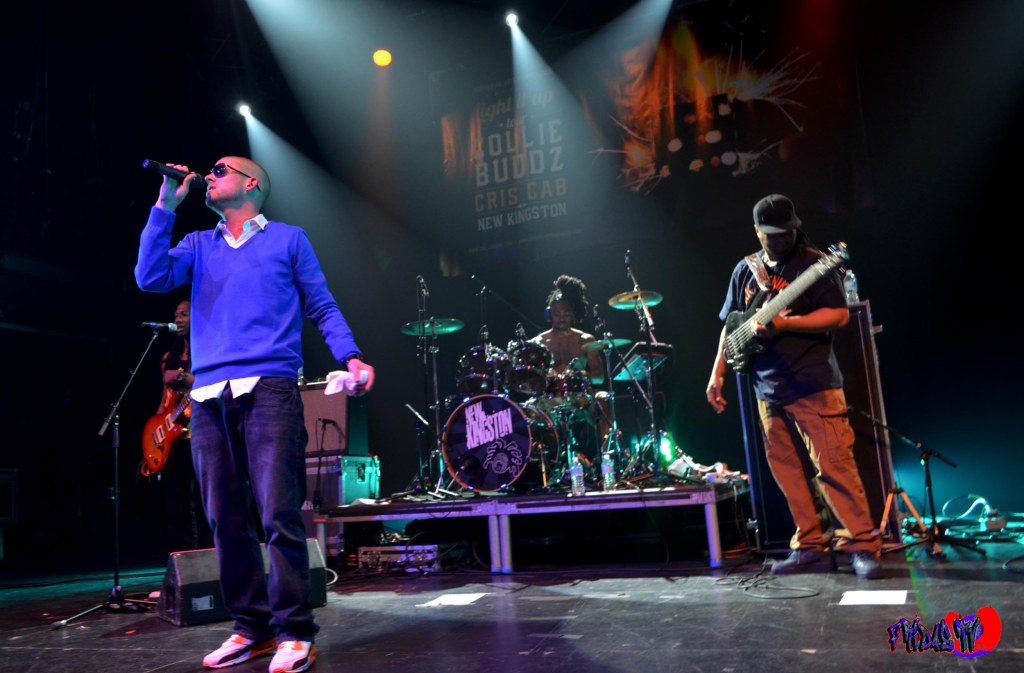 Better lighting this time around and the setlist had old tunes and new, he even played a few super fresh tunes like “Light It Up” and “Payback’s A Bitch”. I was shocked when he threw down “Come Around” so early in the set, I think it was the last pit tune before I migrated back into the crowd. Usually when I’m shooting in the media pit and I have a three song limit I can barely remember the songs, its all a blur! This was true for the first two but the last one I photographed I remembered. “Come Around” is one of his big tunes and I’m used to it being played in the middle or near the end of the set, this time he mixed it up. Looking forward to hearing what Collie drops next his tunes are always original big tunes.

Once I stood still long enough to observe the set for a minute, my attention was drawn to the security guards who came out of the pit to converse with an older Jamaican man. He clearly had a problem with a female who was smoking weed and apparently was blowing the smoke in his face on purpose when he told her to put it out. She should not have aggravated him by showing some common courtesy and he should have known by going to a Collie “Buddz” show on the “Light It Up Tour” people would be blazing herbs. Both could have moved somewhere else in the crowd to avoid the whole problem from the start but that didn’t happen. Don’t know the outcome because I wandered off to another corner too much drama for me, that was the first and probably the last time I will ever see a Jamaican man so mad about ganja. 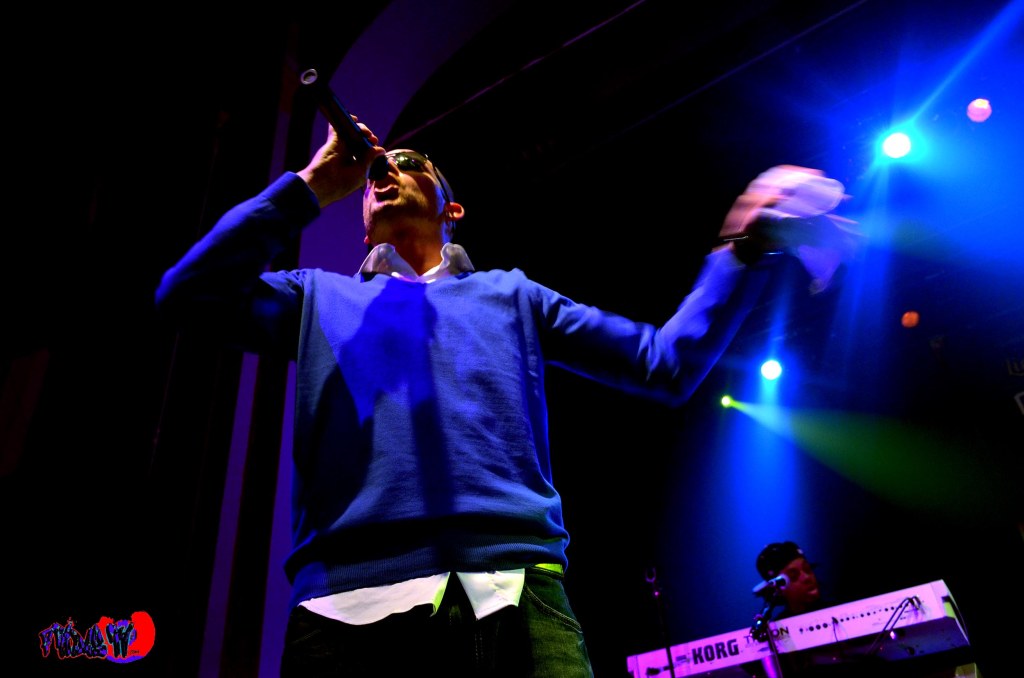 Unlike many musicians and people, I noticed that Collie is loyal to his

crew, New Kingston always is his back up band and the fantastical Lady Alexis is always backup vocals. Lady Alexis (Alexis Layne) did a fabulous job although she didn’t get a solo this time around. I loved the shirt she was wearing, all the haters really should.

Buddz not only played fan favorites like “Mamacita”, “Sensimilla” and “Tomorrow’s Another Day” he also threw down some old school Reggae, DanceHall, Soca tunes like “Murder She Wrote”, “Who Am I (Sim Sima)” and one of my all time old school Reggae favorites “Everyone Falls In Love” by Tanto Metro and Devonte, I believe Beenie Man did a remix of the tune or was featured. I wish my siblings were with me they would have loved this show as would have many of you. 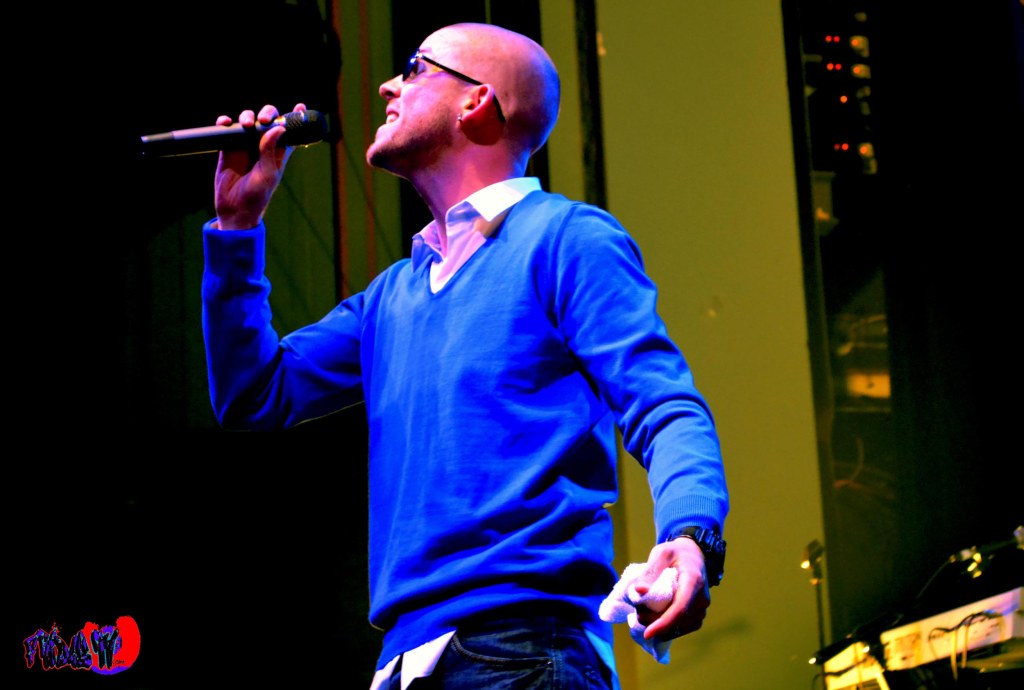 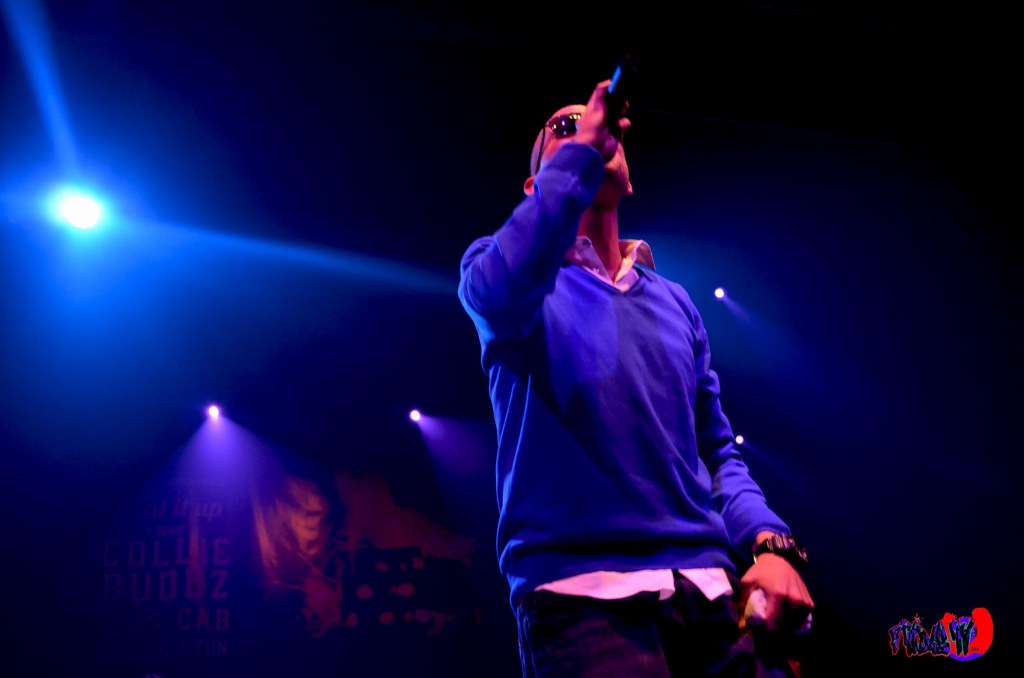 Buddz was relaxed yet extremely enthused when engaging the fans, throwing smiles at them, jumping around. He was bringing his music to life for his fans wholeheartedly with sweat cloth and mic in hand. I have not heard anyone like Collie Buddz, he is still the only one who can throw it down the way he does. With other artists you can tell many are putting on a front but with Buddz he’s as real and natural as they get. The one song the crowd loved the most and I’m basing it purely on the decibel level was “Blind To You”. As Harper came back on stage for the encores, he popped out wearing a custom Toronto Blue Jay jersey with Buddz on the back of it, the crowd exploded! Everyone loves it when people represent their city and Collie does have some history with T.O.. The largest crowd I have seen for Collie Buddz, he also noticed stating that it was his biggest Toronto show and he didn’t want to leave the stage. I will definitley be covering Collie again to see his progression, plus I still want to do an interview! You all should go check out his unique blend of island sounds live if you get the chance. I’m glad everyone was having fun and nobody ended up on a gurney this time. 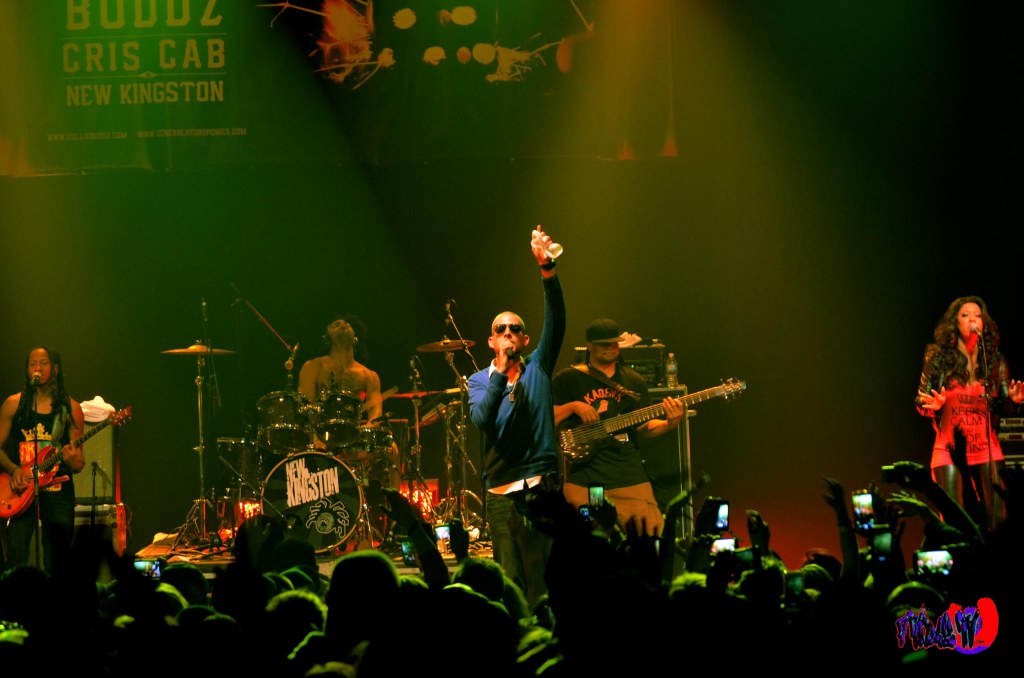