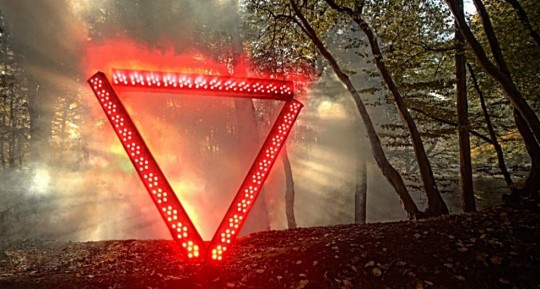 A Flash Flood Of Colour

“The times they are a-changing” – Bob Dylan

An infamous quote can sum up this record in a sentence, if you really wanted it to. But to get to know Enter Shikari’s “A Flash Flood Of Colour” you need to really pay attention to all the elements that are thrown at you by a band that is ushering in a new unique sound with each passing album, that finally resulted in a LP that takes the cake thus far.

After dissecting “AFFOC” the influences that seem to charge this foursome can be heard in each song. Combining Post-Hardcore with Metal breakdowns and electronic music ranging from drum and bass to dubstep, they blend everything so tastefully it doesn’t come across as trying to be the “it” band of the moment, but something trailblazing to keep an ear and eye out for. Lead singer Rou Reynolds delivers a force in his lyrical spewing, with songs about change, a sense of uncertainty with a collage of banter that would make Rage Against The Machine’s Zak De La Rocha proud. Reynolds’ vocals range from clean to a haunting scream and at times can be reminiscent of fellow UK brothers “The Street’s”. The first single “Sssnakepit” shows all the bands elements, it brings you in, lifts you up, throws you around, brings you even lower, then punches you in the face for good measure just as it lifts you back up higher!  Stand out tracks like “Ghandi Mate, Ghandi” show the bands awareness to the worlds issues, a great message to get across in today’s turmoil filled world. “Arguing With Thermometers” explores the fight for control of the oil trade with lyrics fueled (don’t mind the pun) by a driven rant that ignites (sorry, again…) a passion for sensibility.

To really get a grasp on what these fine lads are trying to achieve, seeing them in the flesh live at a venue near you should get your blood pumping and explain everything you need to know. Rob Rolfe’s drumming is impeccable at times, coming in transiently and then unleashing a fury which not even hell hath no answer for.  Bassist Chris Battan and guitarist Liam Clewlow at times seem perfectly in sync, giving way to Rou’s electronic influence which takes over at points, yet the chemistry is heard track after track. An unrelenting message about mankind paints a picture of it dooming itself into oblivion, pushing the fact that it’s now or never for us to turn the course and try to steer the ship into a better direction. You can catch them on their North American tour in Toronto on Sunday April 8th at The Annex Wreckroom to witness it for yourself. Must hear tracks are: “Ghandi, Mate Ghandi”, “Sssnakepit”, “…Meltdown” you can purchase the record here.