On April 8th Enter Shikari hit Toronto on their North American tour to play a packed house at The Annex Wreckroom. A venue that is too small for this band, they need to be on bigger stages because they put on the type of show where wandering room is needed for them to fully throw it down. My first time seeing these lads from The United Kingdom was last year at The Vans Warped Tour where I caught a few tunes, wow was I impressed! They have so much passion and energy; their music is an eclectic blend of various sounds and influences, including infusions of Dubstep properly used with Metalcore elements. The day started out a little grim, I had been ill for a few days already and was trying to gather the strength and energy to complete this mission. You gotta do what you gotta do! Regardless of how I was feeling I made it to the venue for the show and interview with Enter Shikari’s  Chris Batten – Bass/Backup Vocals and Rory Clewlow – Guitar/Backup vocals. A few days prior I asked Joanna (FridaeTV Photographer/Writer) if she wanted to do a few of her own questions. It was the perfect time for her to learn interviews the Fridae way and I really needed her help for this one! Thank you so much Joanna! My voice was hanging by a thread that day, I was amazed at how long it actually held out for. Finally after waiting about an hour in the cold, it was time for the interview with Rory and Chris. They were laid back and seemed a little tired but glad to chat. We were the last interview of the day so who knows how many they did prior and still had to perform! Rou Reynolds Lead Vox was at the back of the bus finishing up another interview and Drummer Rob Rolfe was back in England still awaiting his work visa. From what I recall, Guitar tech Roger was filling in for their American understudy who could not get across the border. It worked out in the end because Roger was amazing with those sticks and he just learned the songs. The interview was definitely not my best work but I didn’t think I was the worst interviewer ever, we will have to do another in the future. You can watch the interview right here. 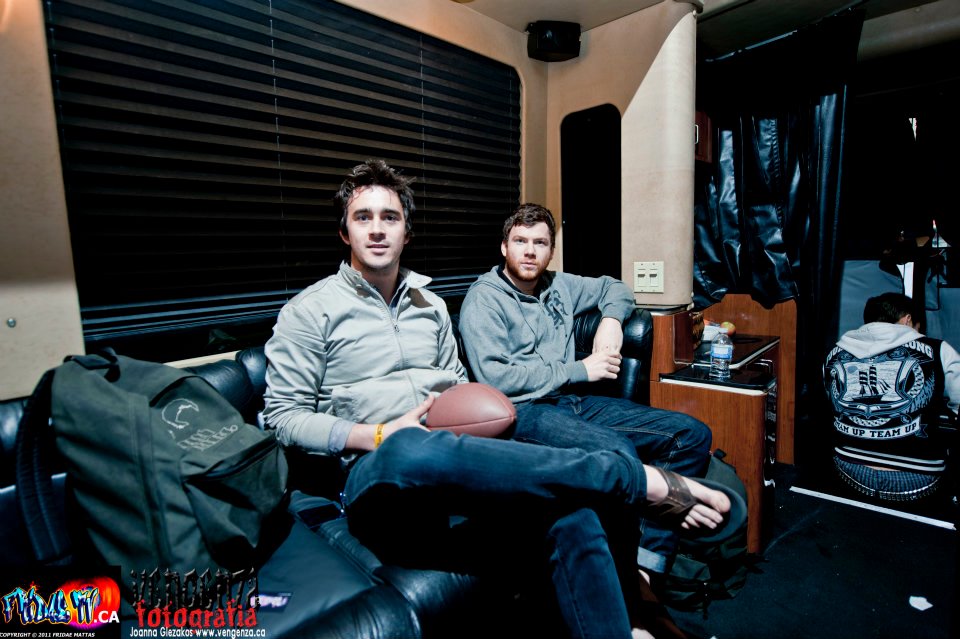 The promoter or whoever buddy was at this event thought he was running a show at the Air Canada Centre and not a struggling bar on Bathurst, there was no need for all that extra drama and attitude. Karma caught up with that guy was pretty quickly because he was running around all night trying to catch crowd surfers to boot, before they tore the place apart even more than the previous bands did. Huge thanks to Sarah and Bob for helping me resolve the problem quickly, it does not go unappreciated! There was a variety of teenagers, some with parents but mostly in groups, one even dressed up as Gumby in full costume and all. I thought that was it for the Mr. Dress-Ups at this show but I was so wrong, there was the Enter Shikari mascot Skully in flotation, well…I think he belonged to them. 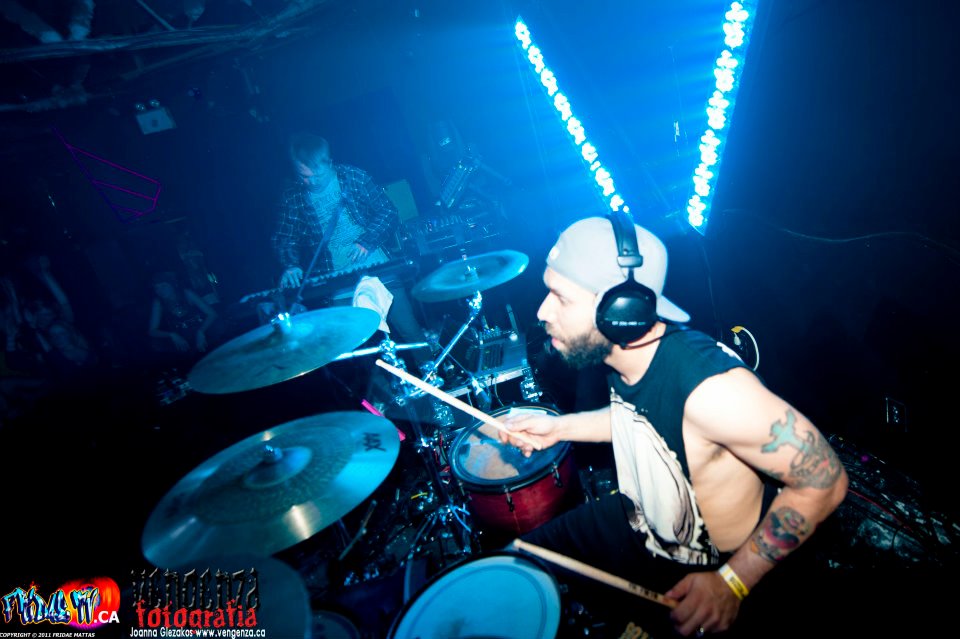 I was permitted to film one track so I found a little area by the merch tables to film from, it was the only spot that was slightly elevated from the rest of the venue other than the stage and bar. No way was I going anywhere near the stage, I really didn’t want to get trampled or air kicked by hyper surfing teens. Although it was the best observation spot in the house there was so much bass and vibration from the instruments and people jumping around, hard to focus camera. Joanna was taking shots from the stage and then migrated to safety after two songs which I am glad she did because it was a bodystorm, there were people launching everywhere! Majority of the kids were landing on the stage and diving back in the crowd as Enter Shikari tore it up. I give them major credit for still being able to rock out with all the fans soaring on and off the stage the whole set! There was a group of larries in their late teens to early twenties near by me planning their turns crowd surfing. Each one who made it onto the stage the friends cheered for and took pictures while singing the lyrics to the songs. That was amusing, it reminded me of when I went to shows with boyfriends, where they and friends would do the same shit. Boys will be boys! It doesn’t matter what generation or age, they will all play video games until they die and do the same stupid shit that you can’t help but laugh at it. 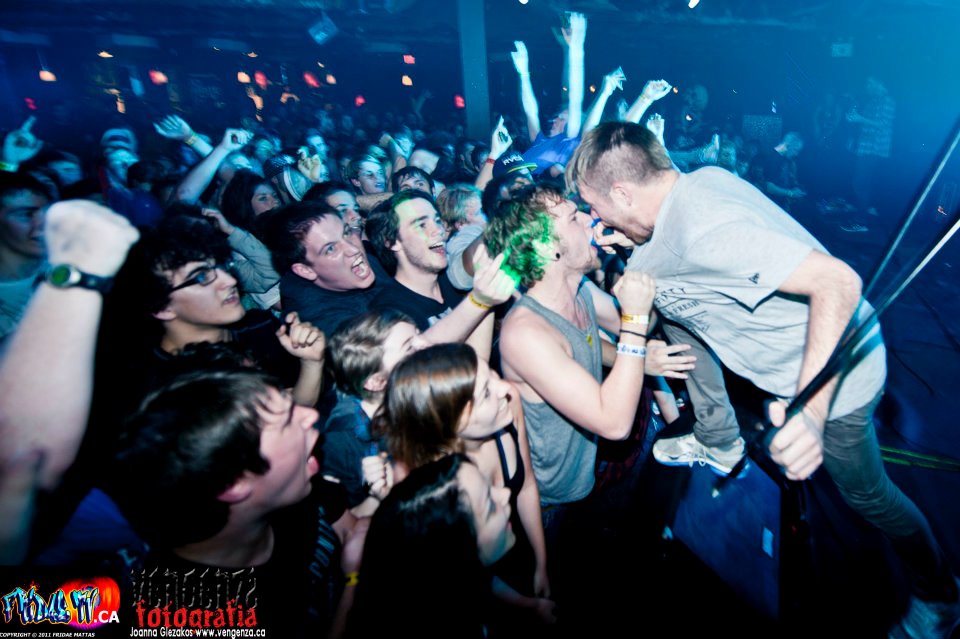 Enter Shikari played a fourteen song set, majority from their latest record “A Flash Flood of Colour”, they started out with a medley of the first and second tracks on the record System and Meltdown, the lighting was awesome because they brought the album cover to life with the triangle’s multicolour flashing lights and not just the red hue. The chemistry amongst them was evident, they looked natural and genuinely enthused as they bounced off of one another. There were a few technical issues, I think some guitar strings broke from what I could understand and Rou had to ask the sound tech to turn up a few instruments and mics a couple of times. It was fun to watch the band go from the laid back larries (guys) of the interview, to these stage personas ripping up the stage! One of the best sets I have seen from any band this year so far, it was just as exciting and unpredictable as the record but much more entertaining. They all fly around, hang off of pipes and crowd surf with the people, giving the fans a show to remember! Enter Shikari interacts and enjoys their own music as much as the fans do, if they don’t sincerely love it, they definitely deserve an Oscar!

If you are looking for a magnificently refreshing band, Enter Shikari‘s sound waves are for you! Go see them, you will not be disappointed because it doesn’t matter what age you are, prepare to be blown away. Currently on tour somewhere near you and I hope to be seeing them again, this time on a bigger stage where they can roam freely. If you don’t know, now you know, Enter Shikari is Fridae approved! You can watch the video of the first track below and can find more photos of the set on www.facebook.com/fridaetv.