This was my first CMW and I was really excited to kick it off! It all started on Wednesday March 21, 2012 with Voice 106.5 FM’s presentation at The Revival. The show featured Jace Martin, Red Laforme and Team Deadly, Phantom Black, Janet Panic, Die Mannequin and Floor Thirteen. I had a pretty long day so I was excited to go out, have a drink and enjoy some great music. Most looking forward to seeing Die Mannequin in a small venue, the last time I saw them they were opening up for Marilyn Manson at the Air Canada Centre. I managed to catch Janet Panic’s performance and was really surprised! She is new to me for I have not heard of her before; she has a very interesting sound. Her lyrics are captivating and her stage presence is intoxicating, a born musician for sure.

Soon after Janet Panic’s set was a wrap the venue filled up and Die Mannequin was about to hit the stage. Current line up includes Care F (Vox & Guitar), Anthony “Useless” Bleed (Bass) Dazzer Scott (Drums) and Stacy Stray (Guitar). I must admit the first time that I saw Die Mannequin I was a bit put off by the fact that Care F performed after chugging a 26 oz bottle of Jack Daniels. I was glad this time around she drank a bit less and functioned a bit more, she only drank  a bottle of beer or two, I would have had a few of them too! She was very energetic which was great and a lot more fun to watch this time. The performance was strong start to finish and the crowd cheered more and more with each song. They performed a few new songs from their upcoming album tentatively scheduled to be released mid-April. During the set they also plugged the film they’re featured in Bruce MacDonald’s “Hard Core Logo 2”, expect to see more from Die Mannequin with a new single on the way and music video they are not going anywhere but up. It was great to see two very strong female musicians kick off my Canadian Music Week! 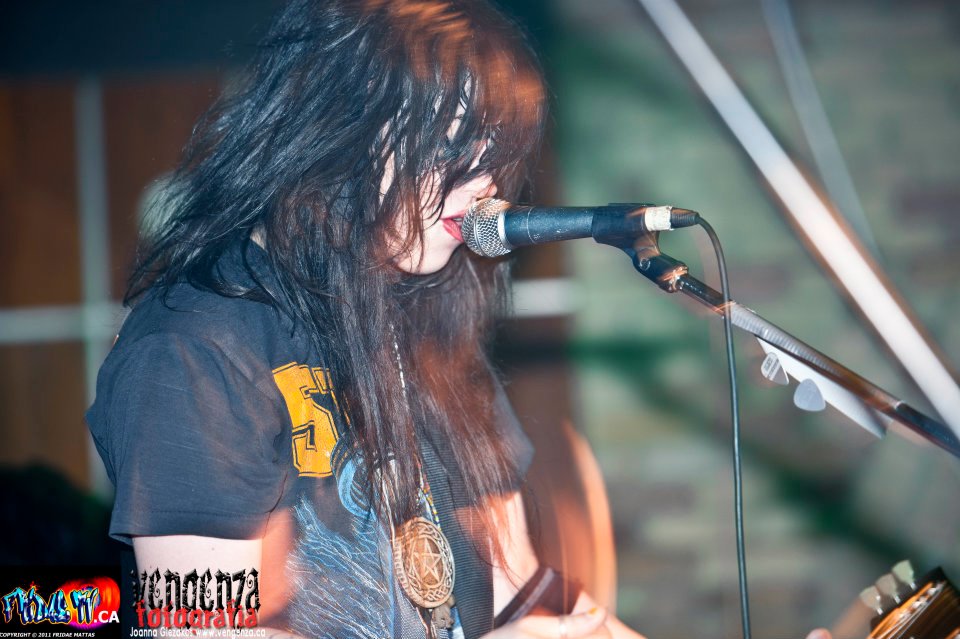 Day 2 began with me checking out a great local band called Bathurst at the Hard Luck bar. Didn’t stay too long but it was great to see some familiar faces. A bit disappointed that my initial plan of seeing I Mother Earth had fallen through but I was excited to check out some new music! ­­­­­I headed over to Drake Underground to catch the Blackburn Radio showcase. I arrived to a full venue but I skillfully squeezed my way forward through the dancing crowd to see These Electric Lives had started their set. This was my first time at the Drake Underground; it has tables, comfy couches, a low key atmosphere and even a disco ball. These Electric Lives were so infections they had everyone dancing and loving it! It was amazing how they did this high energy performance on a tiny stage, bouncing around and jumping off of the bass drum. The lighting was terrible but I managed to get a couple of good shots. This electro-pop Canadian quartet includes Mark Stanfield, Gary Peter, Bryan Low and Mike Indovina. They are to release their new album this spring make sure to grab a copy! 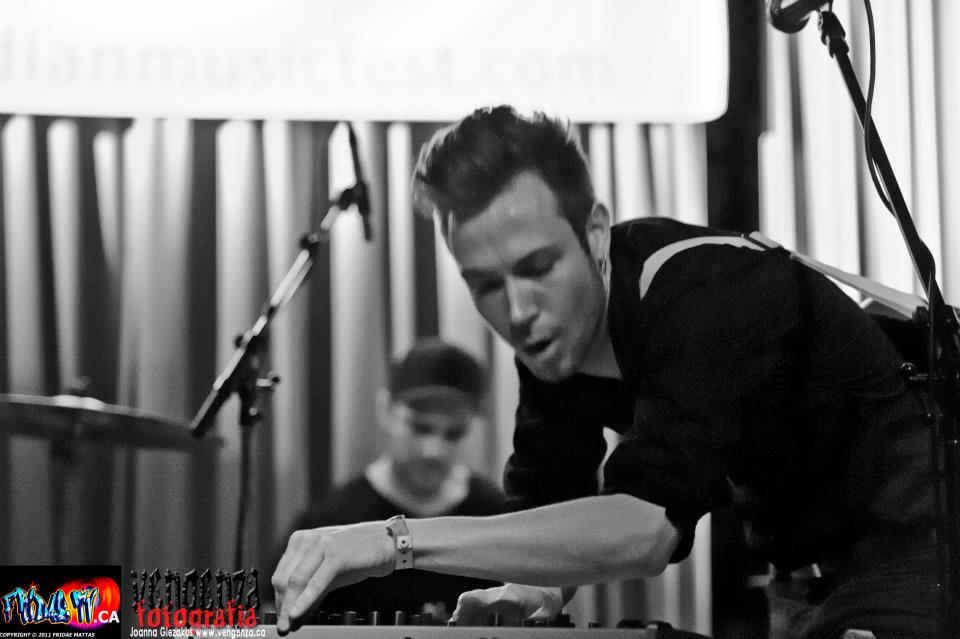 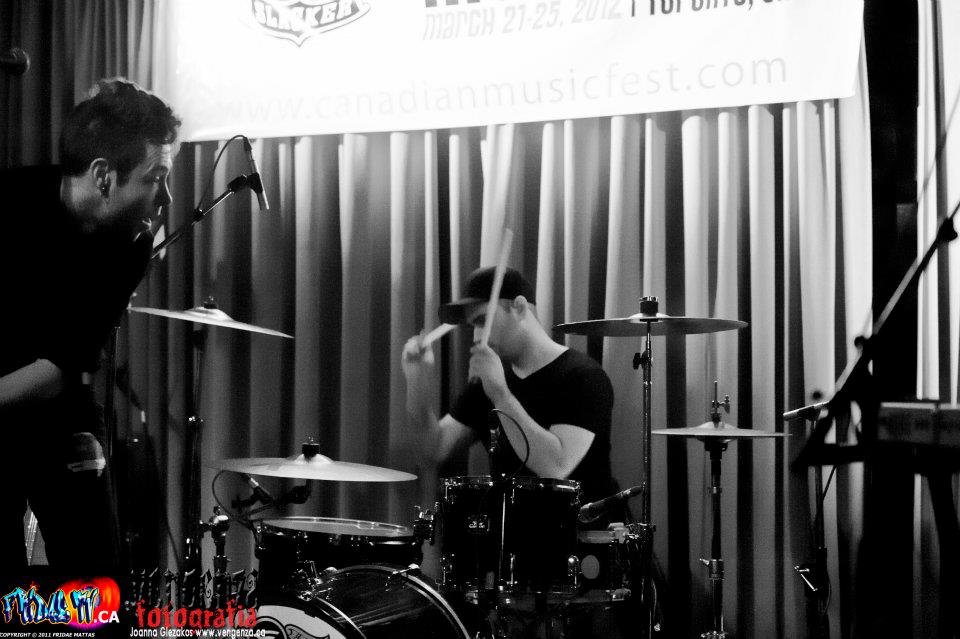 Just as I was ready to head out of the venue, I stopped in the bathroom and saw a flyer for a band called Aerials Up a Scottish Irish seven piece, March 22nd Drake Underground 11pm. I got excited. I had to see how seven people were going to fit on that tiny stage! It was the deciding factor on my decision to stick around and watch a couple of songs before heading out. So very glad that I did because this band is incredible! The songs were contagious and the vocal harmonies were very sophisticated. The venue had pretty much cleared out, maybe only 30 people left sitting and drinking when the band started to play. They are a very talent bunch of seven, truly diamonds in the rough and for those that left, you definitely missed out on a fantastic time. They even invited the crowd to an Irish drink off on the Sunday and I can truly say I’ve never met just a cute band. I mean it in the nicest way possible, they were sweethearts! Each song was better than the last and just the greatest pleasure to watch. They recently released a single titled “The Old and the Innocent” and have a few videos like “I Am” you need to watch. 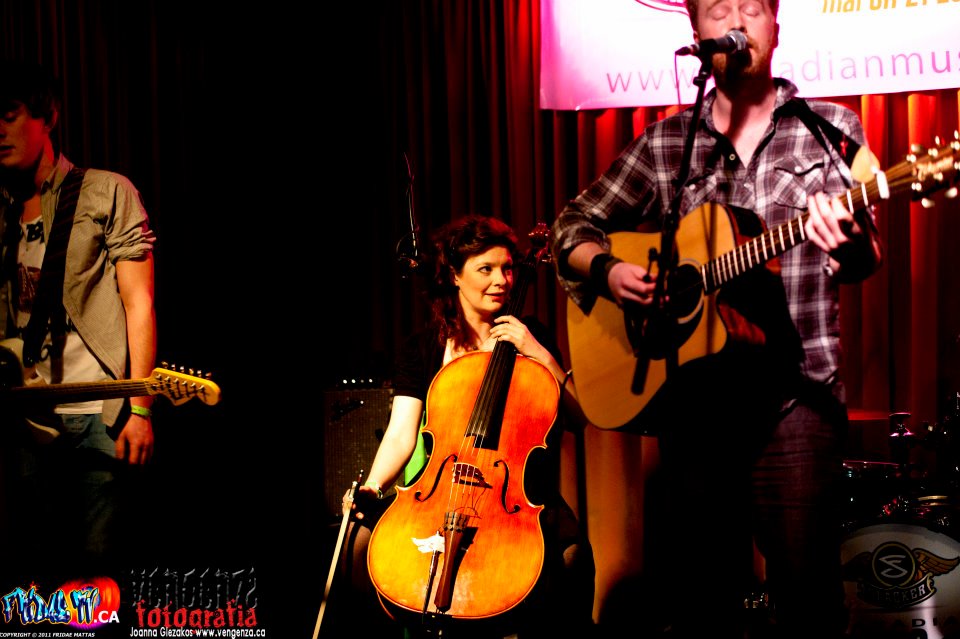 On Friday we started our day early at The Fairmont Royal York Hotel for a few interviews and the Sirius Radio Music Awards. We hooked up with the guys of Neverest to do an interview and answer a few fan questions. Fridae and Dell were covering the Slash interview done by Dave Bookman and I stopped by the CRMA’s. Bonus for me, there was some free food and free drinks in the media room which was pretty sweet. I headed over to a fairly empty media pit, which was just fine by me. I ran around and took all the shots I needed. Performers included The Sheepdogs, Dragonette, Neverest, Kira Isabella, Fefe Dobson, Alyssa Reid and Raghav.

The best part for me was seeing The Sheepdogs for the first time who I’ve recently become a fan of. My second favourite part of the show was watching Alyssa Reid have to get up and walk five minutes every time she got an award. Seriously guys, if you know she’s gonna win so many awards why not sit her a little bit closer to the stage? It was good fun and I’m surprised how easily they turned one of the conference rooms of the hotel into a concert venue so quickly, not to mention the lighting was just fantastic! You can see the full list of all the nominees and winners on the CMW website. 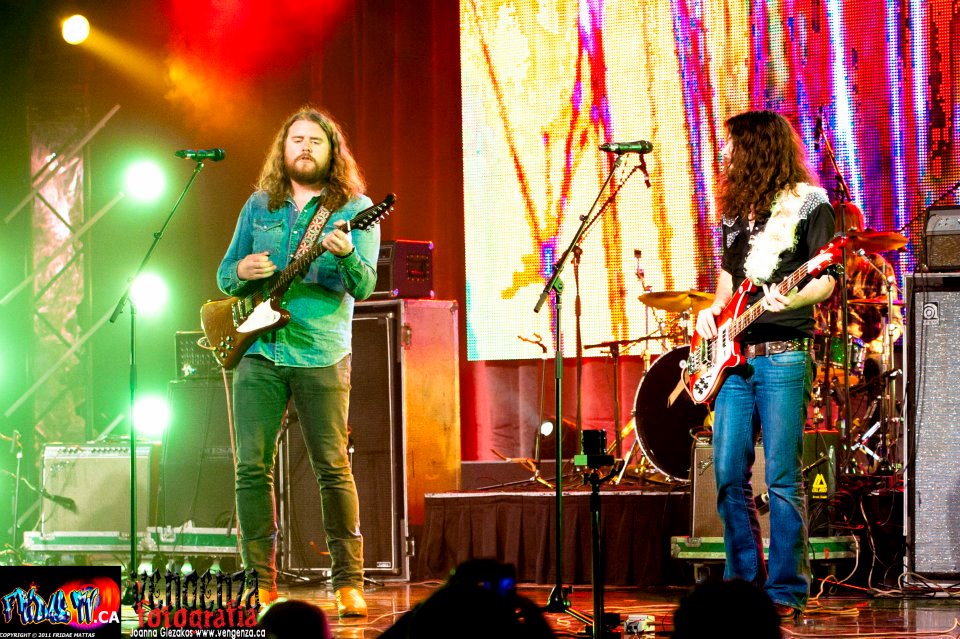 After the awards I headed home for some much needed RNR and got ready for Slash! I was super excited to be heading to the Phoenix to cover such an extraordinary performer but to my surprise I was kicked out of the venue as were the other 20 photographers that had been let in with me. It seems that Slash’s management had only approved 5 out of the 700+ media outlets that were approved for all of CMW. It was a bit frustrating but we decided to make a night of it. We bar hopped from the Phoenix, to Tattoo Rock Parlor, The Bovine Sex Club, The Hideout then the Hard Luck! Boy was it busy. We had just missed the set at the Tattoo but we headed over to the Bovine and caught The Victim Party, an awesome punk band from Toronto. The venue was packed and every single person was singing along. I watched in awe as they tangled themselves in their mic and guitar chords, dancing and spinning around each other.

Next it was off to see The Suburbians at the Hideout, they came all the way from the UK the band is: Mark Konstantinovic, Ben Konstantinovic, Charlie Roberts and Ben Nyari. The Hideout was filled with women who were absolutely giddy, it helped that their smiles and accents were charming and their music was great. For a band whose only been around less than 2 years The Suburbians have made a splash in the music scene and for good reason! They are absolutely terrific live; I encourage everyone to check them out.

Now to move on to something heavier, I made my way to the Hard Luck Bar to catch Dancing With Paris. These guys have been on the road for a while now traveling all over Canada and I was excited to be able to catch them at CMW. The crowd was energetic, and front man James Manning was just as rowdy, going into the pit and even crowd surfing a bit. I know these boys are coming back to Toronto soon so if you’re down for a Hardcore show you need to see them! That marked the end of my night and I headed home to upload all the images since I knew Saturday would be another long day. 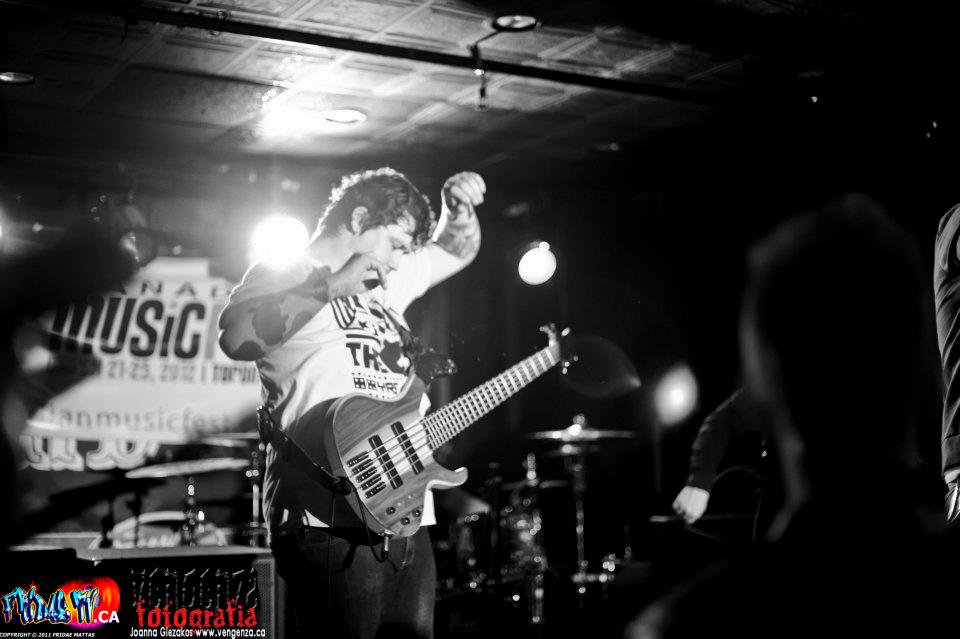 Saturday we attended the Indie Awards and I saw many a familiar face in the crowd. At the Fairmont Royal York Hotel, I arrived to a very packed conference room. I cozied into my spot where I sat for the majority of the show. There wasn’t much moving around this time, too packed and too many photographers trying to steal spots. It was the first time I had seen so many photographers in one place. I don’t want to bore you with the same story, so I’ll keep it short. The performances were great and I got to see the Sheepdogs again. Other performers included Pavlo, The Pack A.D., Young Empires, Dan Mangan, Rich Aucoin and even Passion Pit.

Treble Charger performed which was a blast from the past for me and they were even inducted into SiriusXM Indies Hall of Fame. Award Winners can be found at www.indies.ca. The highlight of the show for me was Dan Mangan. After winning for best “Solo” Artist Dan brought his whole band to the podium with him and joked at the fact that they won for “Solo” artist. He introduced his band and said he couldn’t do it without them. Not only is he a nice guy but he is extremely talented. His voice is so unique and his songwriting ability is beyond his years. I can see him doing many amazing things and wish him the best of luck in his musical career. Like I said, I want to keep this short so that’s all from me. Hope you enjoyed reading my CMW memories you can see my shots on FridaeTV Facebook, can’t wait to go next year! www.CMW.net 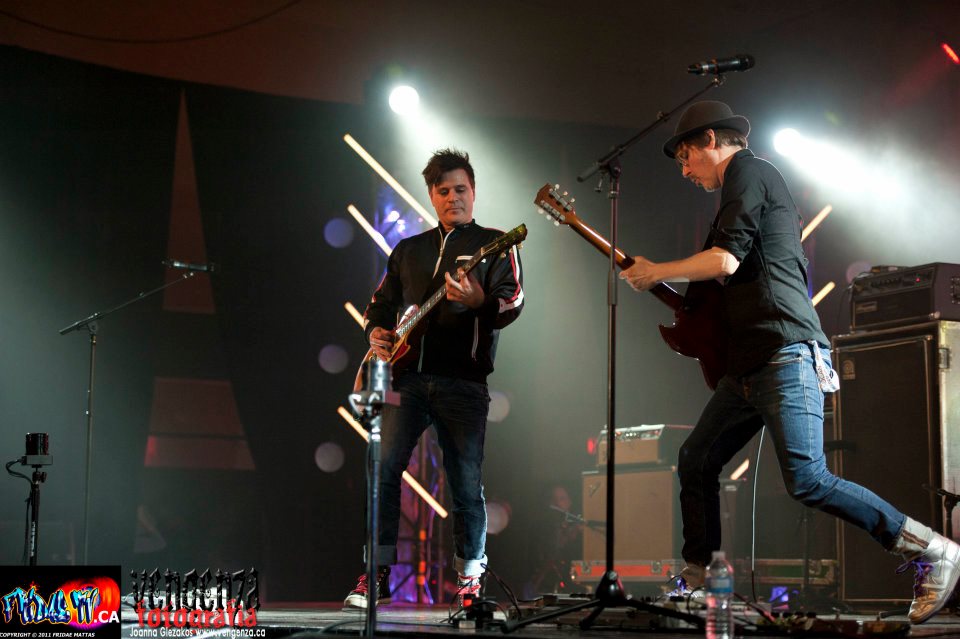