This year was my first time at the North By Northeast Music festival and conference. I kicked Wednesday off picking up my pass from Fridae at the NXNE Headquarters and headed out to see Gus Wenner and Scout Willis at The El Mocambo. Yes, the  Scout Willis! It seemed as though everyone wanted to get a glimpse of the Bruce Willis and Demi Moore spawn. When I first arrived at the venue there were a only a few people but once the band started to play it filled quickly. Could have been the buzz of wanting to see a glimpse of star power or it could’ve been that they were actually pretty good. Scout seemed a bit shy but her voice is powerful and unique. Gus is a very talented guitar player and after a great solo in Gone, Gone, Gone, Scout congratulated him with a kiss on the cheek. As the first band of my NXNE experience they were pretty great, with a classic sound like theirs and a bit of work developing their style, they’ll go a long way. After Gus & Scout I went over to the Bovine to see The Rabid Whole. 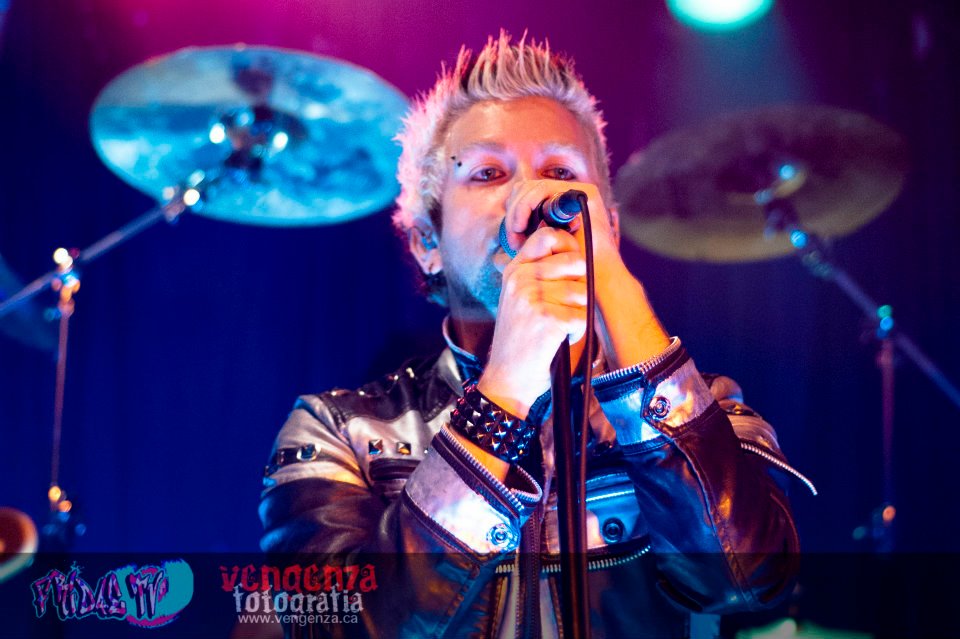 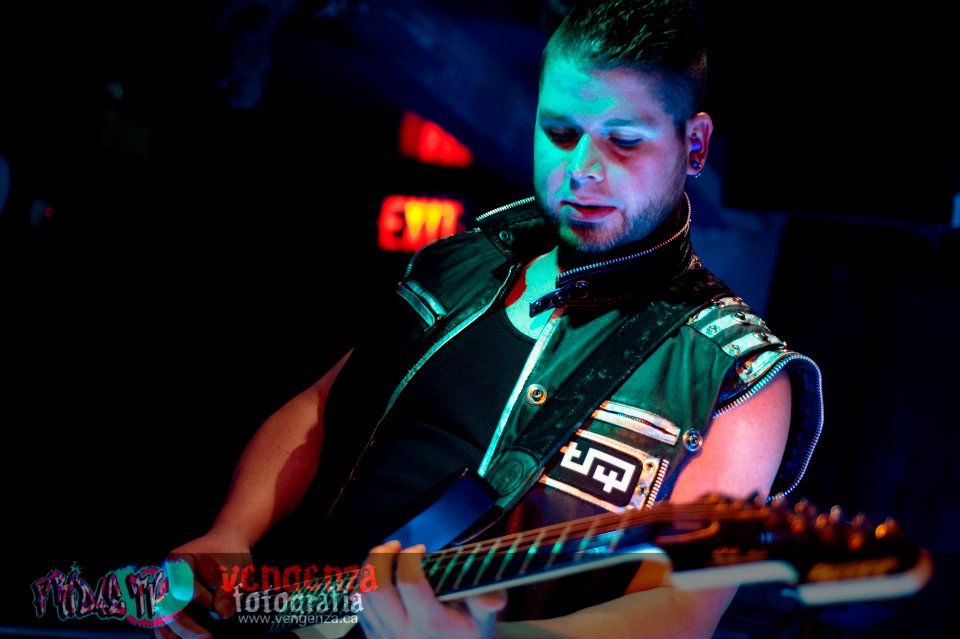 I wasn’t sure what to expect arriving at the Bovine. As I watched the band set up their equipment and lights, I was wondering what they sounded like . They were wearing similarly designed chain covered attire and had one hell of a fancy light set-up. The Rabid Whole ended my night with a bang! As soon as they started playing, their energy filled the tiny venue that is the Bovine. They had a grand sound, great stage presence and they jumped around the little stage rocking out harder than a lot of other bands I’ve seen. The Rabid Whole just released a new record with their new lineup and are worth checking out! 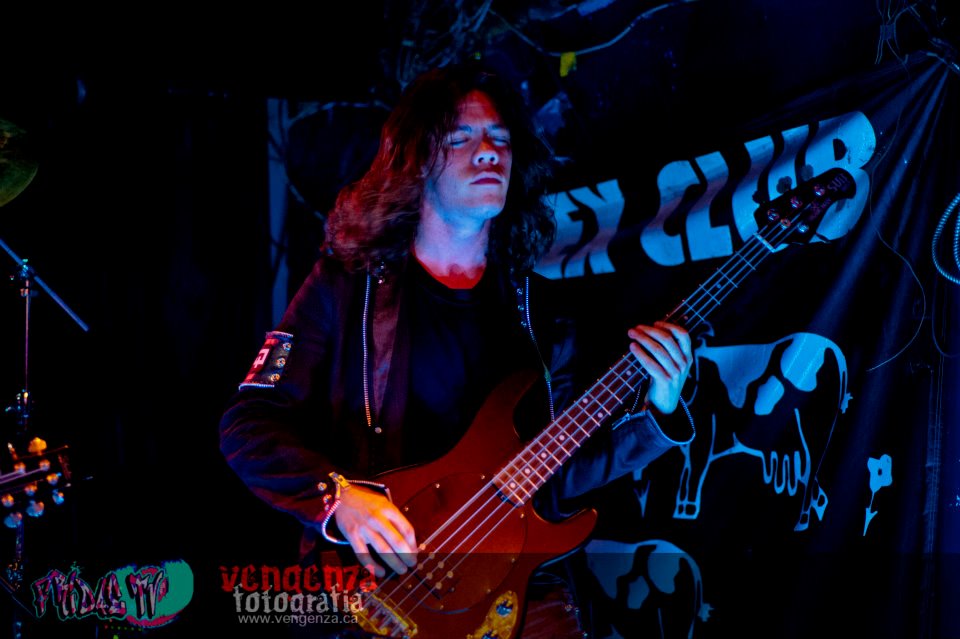 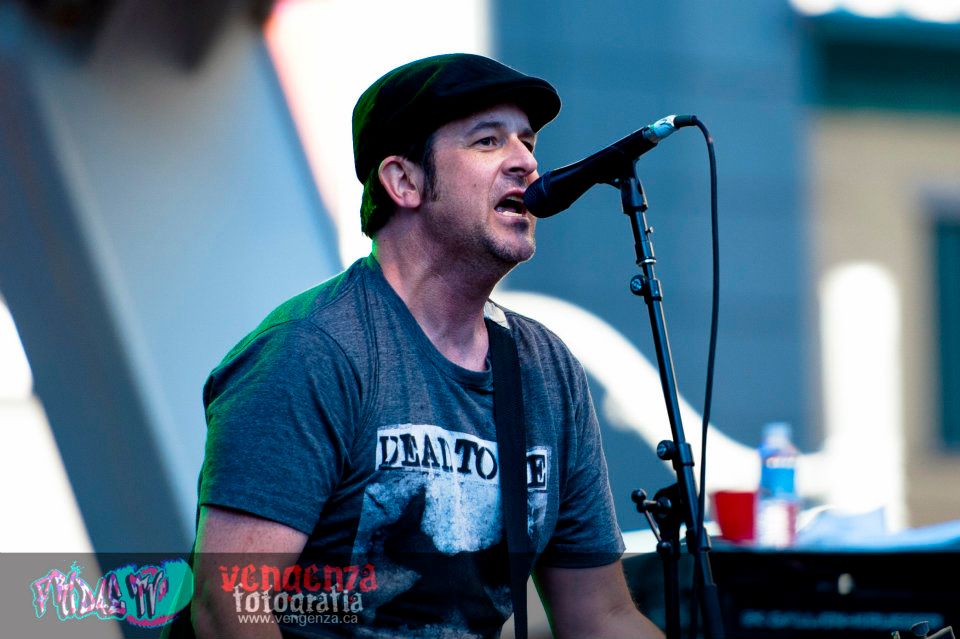 I was excited for day two of NXNE as I would be heading to Yonge and Dundas Square to see what would be the most exciting day for me; No Use for a Name, Good Riddance and Bad Religion. Spending a long day in the hot sun wasn’t going to be pleasant but thankfully there were lots of ways to cool down. I first headed down to Y&D and caught a bit of Trouble Andrew, then Slaves on Dope. For a bit of a break we headed over to the beer tent for ridiculously expensive refreshments. The best part of the show at YDS was not the free show but the fact you could leave at anytime, grab some grub, go to a local restaurant or bar, grab a drink and for many even head over to the LCBO to grab a couple of beers to sneak into the pit. 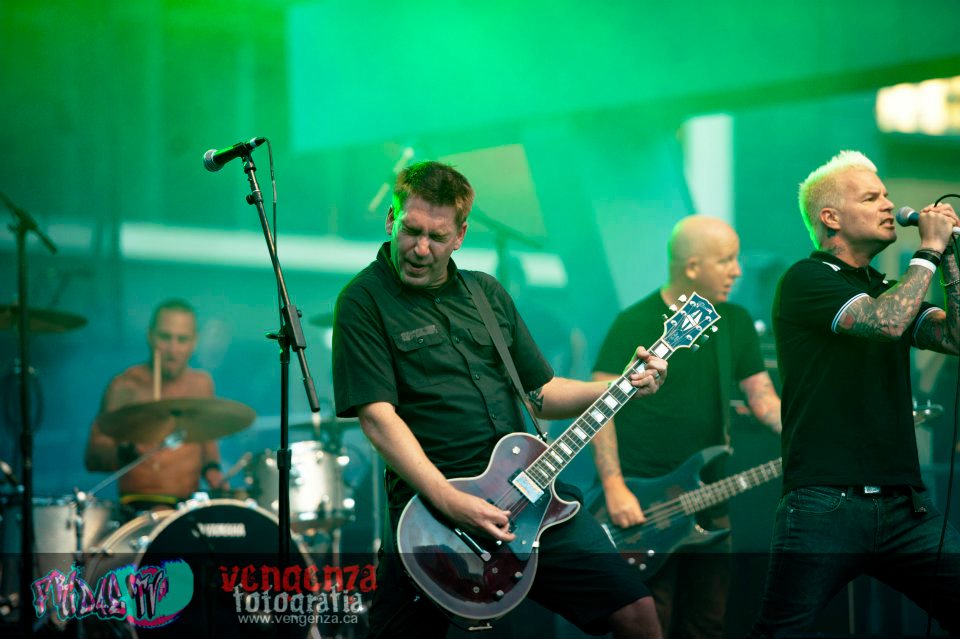 After fueling up at the Eaton Centre with some delicious food we headed back to check out No Use for A Name. One of two punk bands on that day’s line-up from California, No Use put on a great performance for old fans & new. The pit filled quickly right after for Good Riddance. It’s no surprise since the band played a farewell tour in 2007 after almost 20 years together. The band finally reunited February of this year and NXNE was one of their first shows together since their breakup. They put on a good show and got the crowd pumped for Bad Religion. I made a small mistake leaving the front of the pit to hang out with some friends because I found making my way back was more difficult than pulling out teeth! It took three songs before I was close enough to the front of the stage to take some shots without being in the destruction zone that was the mosh-pit. 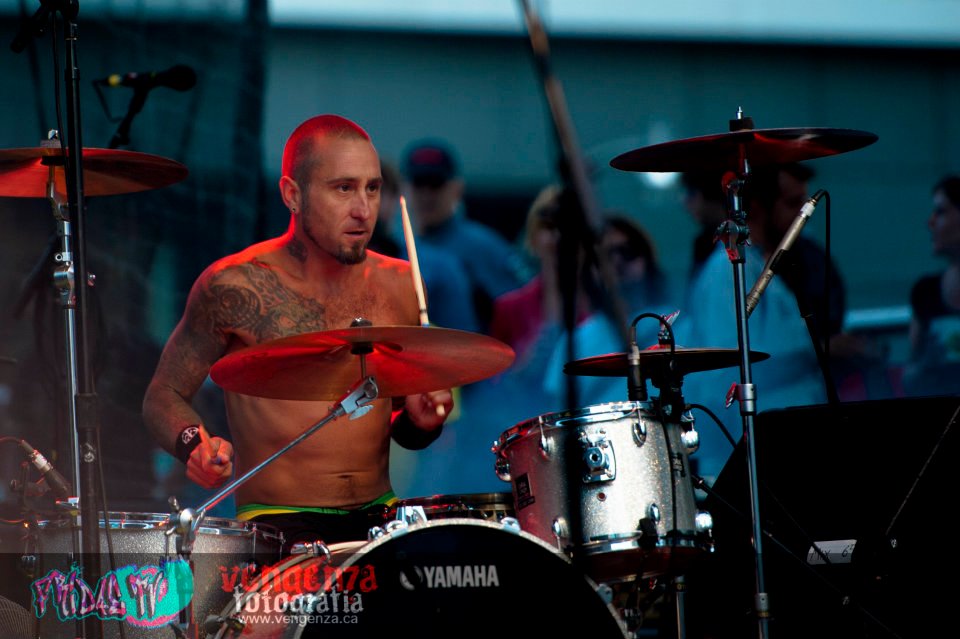 As the sun had set and multiple drinks had been consumed, the crowd was rowdy and wasted. I stood there singing along and getting squashed & almost crushed, I watched as more people squished into the make-shift pit expanding the barricades. There were so many crowd surfers I’m surprised no one got hurt! People were coming from the beer garden and jumping over the five foot spaced barricades and into the mosh-pit, the crowd was going wild! After a few jabs at us Canadians, Bad Religion announced their next tour would be Canadian and couldn’t wait to come back. As much as I enjoyed their performance it was too hard to have a great time in such a big crowd. As the opening night at Yonge and Dundas square, I think the organizers realized they’d have to block off Yonge street for the next few days for the events. 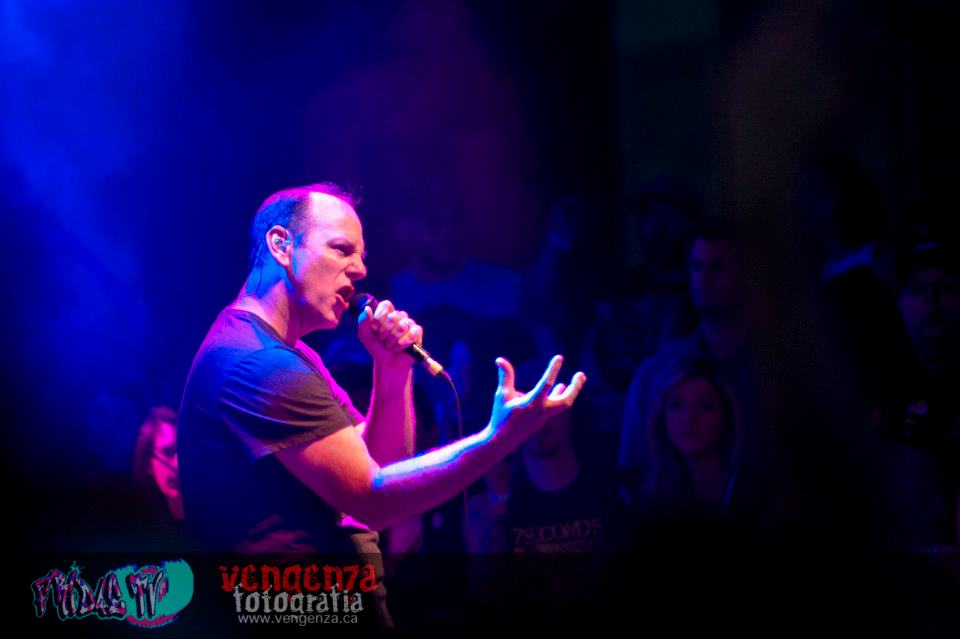 After Bad Religion, I met up with a friend and headed over to Lee’s Palace to catch Obey The Brave and Protest The Hero. It was nice to be in a smaller venue, we got there just in time for OTB, which I was really excited to see. If you haven’t heard of them they’re a mash-up of ex-members from Despised Icon and Blind Witness and have a great sound. As soon as OTB cleared the stage Protest members came to set up the stage, the venue started to fill quickly and the room filled with whistles, cat calls and chants of “PTH! PTH!”. As Rory (lead singer of Protest The Hero) came out onto the stage, cheers erupted from the crowd;  It seemed as though I wasn’t the only one super stoked to see our hometown heroes.  As they played their set, made jokes about gaining weight & being lazy (it’s okay Rory it happens to the best of us) I couldn’t help but noticed how many people had squeezed into the venue. 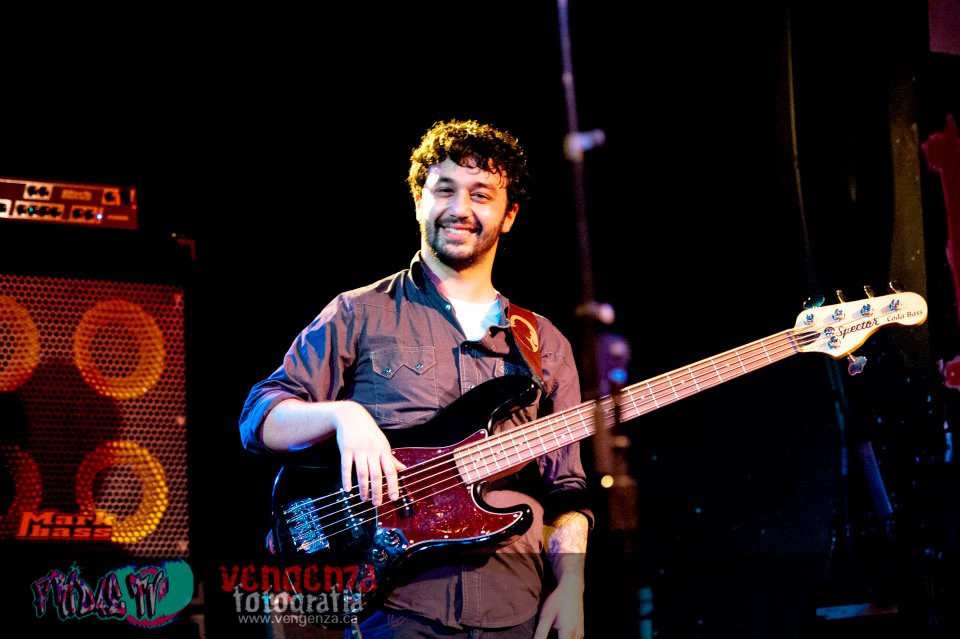 If you’ve ever been to Lee’s before it’s small but has a section for the bar and seats then lowers to the pit, the front of the stage was surrounded by a barricade. The pit was packed, any movement made shook the barricade and swayed it back and forth with the movement of the moshers. They pulled crowd surfers on stage so they could dive back in. Girls and guys alike were hot, sweaty messes and the energy from band to fans was infectious. This was probably one of the best Protest The Hero shows I’ve ever been to and I can’t wait to see them again at Heavy T.O. Check out their latest album Scurrilous. 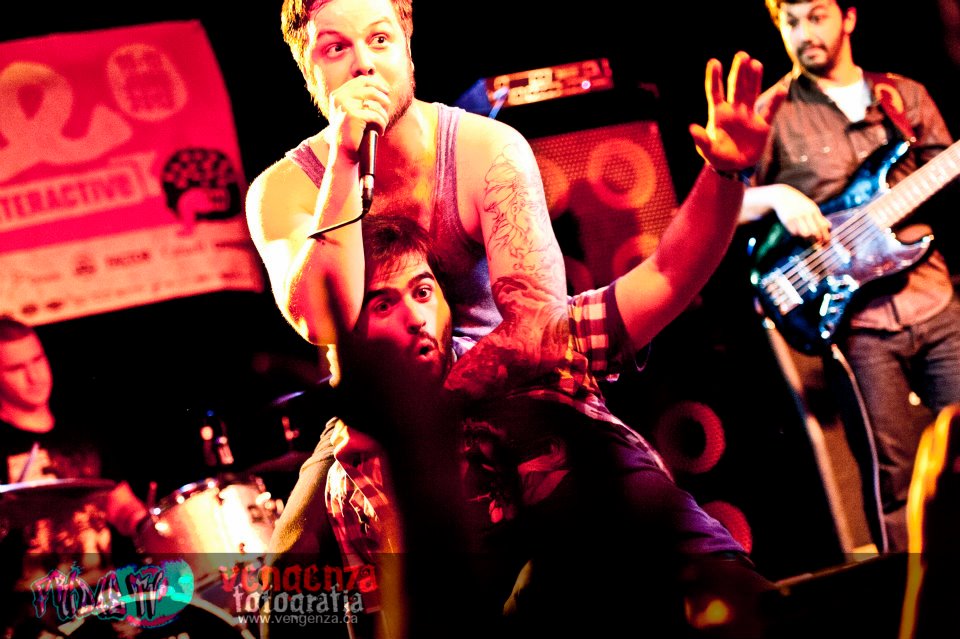 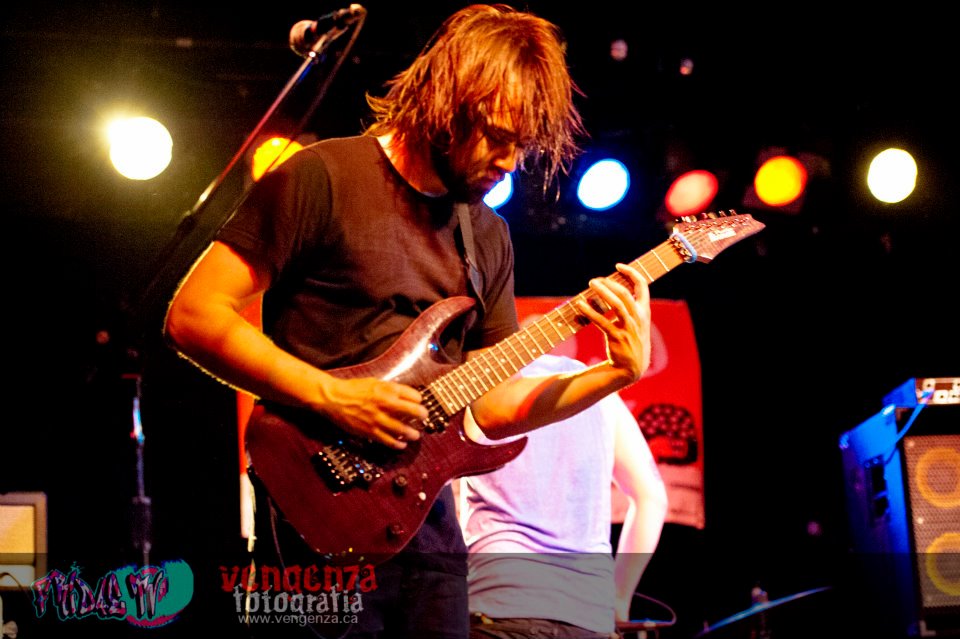 After putting almost three thousand shots on my DSLR on Friday night, I was glad to take it easy on Saturday. I headed down to see Hollerado and Oberhofer at Yonge and Dundas square. Hollerado always put on a great show, Menno Versteeg always manages to jump of the drum kit which I got a sweet shot of, and they’re always jumping and moving around and great fun to watch.  Menno reminisced about his grandfather and even paid respects to The Flaming Lips by only firing off one confetti canon. I felt bad for the band though it was so hot that day and they were facing the sun for their entire performance. After Hollerado the crowd got another treat with Oberhofer. Lead singer Brad Oberhofer definitely ruled the stage with his presence and funky dance moves. I hadn’t heard of them before but they were actually quite good and if you like Hollerado you’ll probably like them to so check them out.

A friend of mine was playing at The Velvet Underground and I promised I’d check them out, so I headed over there when Oberhofer ended. It was a bit of trek though considering they had blocked off Yonge street on Saturday, and queen street was blocked off too because Much Music was preparing for the MMVA’s on Sunday and College was closed off because of Taste of Little Italy. Crazy weekend!

The Flow, a local hip-hop/funk band from Toronto hit the stage at the Velvet Underground. The stage is small especially when your band consists of 9 members. The band was great, they open with a drum line and as each member gets on the stage they add their instruments. Covering songs by J’Dilla and N’Dea Davenport’s ‘Whatever you Want and’ Maroon 5’s ‘This Love‘. They’ve got a unique sound, a balanced group dynamic and a above par skill level. During their live performances they always feature improvisational solos during their own songs, Saturday’s performance included a surprise harmonica solo from Sax player Andrew Racknor. If you’re looking for a great time and want to hear some new music these guys can really play, they’ve got great original tunes and know how to get the crowd going. They’re passionate about music and are always playing local shows check them out live or on their website at www.forthoseintheflow.com.

NXNE was full of many firsts for me. First NXNE, first time seeing Oberhofer, first time at Velvet Underground and I really enjoyed it. I hope it was as fun for you guys as it was for me. If you didn’t get a chance to check out any of the shows, the $58 you pay for the pass is worth it, so you definitely must check it out next year. This years performers were amazing and they only keep getting better. A great showcase filled with plenty of fantastic acts and many free shows, I’m sure you’ll find something you like! Check out www.facebook.com/FridaeTV for more photos.