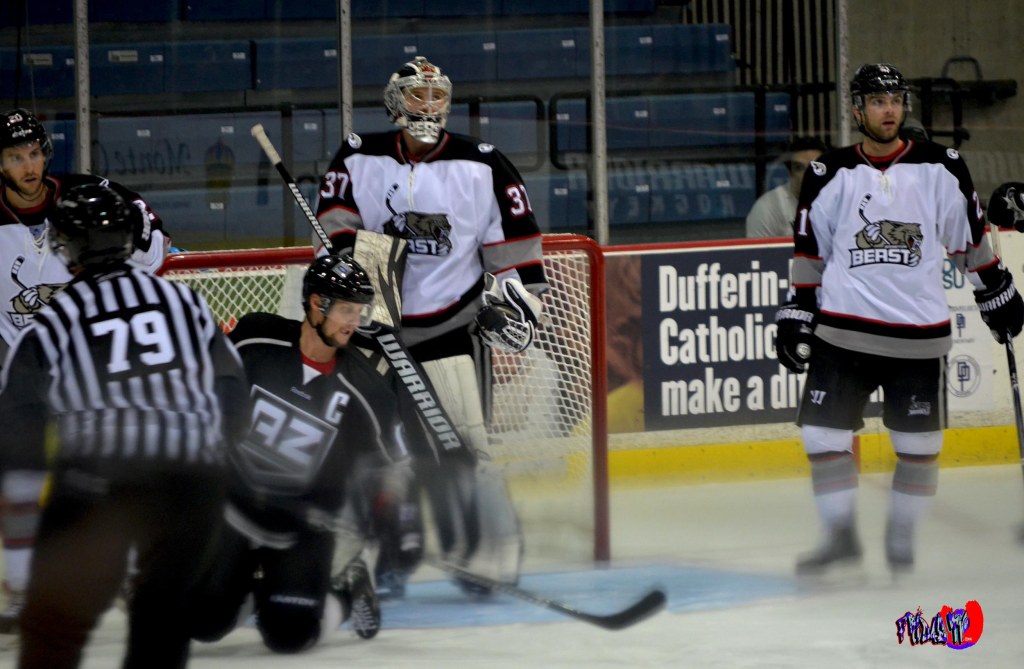 Caught up with Brampton Beast Goalie #37 , Grant Rollheiser after the game last Friday November 8th. Unfortunately they lost that game but managed to win the tie breaker game of the 3 game series 2-0 against the Allen Americas (CHL league champions and Dallas Stars affiliate team). Wish I was there to have seen Rollheiser guarding the gate and keeping the skilled Americans out of the Beast’s net. At 6’4 you would think the Chilliwack, BC native would be a little slower with all that gear on, not Rollheiser I’ve seen this kid in action against the Arizona Sundogs and the Beast won that game 4-0. Friday’s game was intense, the Americans were out for blood so much more hostile than the last team and I noticed the referee’s were calling a penalty for every minor infraction. Brampton did get a goal thanks to Beast #9 Left Wing Andrew Fournier sliding one passed the Allen American’s steel cage goaltender Bryan Pitton (who ironically is from Brampton). Fournier was assisted by #10 Right Wing Rob Collins and #16 Center Tylor Michel.

The Beast can really slay the ice, a good old fashioned fight took place between #4 Beast Defense Andrew Darrigo and Allen American #21 Garrett Klotz, obviously both were awarded penalties for that. Fights are dangerous but it is a part of the aggressive game that Hockey is. The Beast are hitting the road until the next home games December 12th, 13th and 14th you can grab your tickets here! Check out the interview with Grant and the gallery of stills from the game.