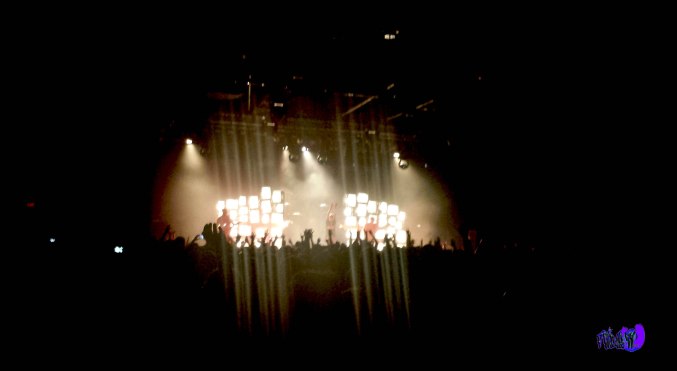 THE USED & TAKING BACK SUNDAY KoolHaus. The show was sold out and the fans were still wrapped around the Guvernment entertainment complex as they headed into the venue when I arrived. The Used hit number one on the Billboard Indie charts and debuted at number 14 on the Billboard 200 with their sixth studio album “Imaginary Enemy“. The LP was released on April 1st, 2014 and shattered Pandora’s streaming records. “Imaginary Enemy” is the most streamed premier in Pandora history, with over a million in the first week and over 625,000 spins on the actual date of release. Those numbers are pretty amazing for an indie band, these days it’s so much easier for people to find music they like, the possibilities are endless! The Used are not the only ones who released a new album; Taking Back Sunday dropped their fantastic new record “Happiness Is” March 18th. And, according to Bassist Shawn Cooper “It’s very rare that any band has their best release 6 albums in. In my opinion we did just that.”. You know what? I completely agree with Cooper. I’ve been listening to the older and new records of both bands; and the new albums are definitely the best material I have heard. You can read the full interview with Shaun Cooper here.

One of my friends saw the show in Chicago and told me Taking Back Sunday was on first so I was expecting them to hit the stage so Joanna and I could switch out but instead it was The Used who emerged with a blast of energy…Clearly my friend was confused…The stage set up had a bunch of TV’s stacked together on both sides. Cool visuals that also provided extra lighting, it reminded me of Rza’s set in the video for the track “Gone”. Have not had the chance to see The Used live before, I always missed them or they weren’t allowed into the country. Bert McCracken mentioned to the crowd that it was a challenge to get across the border. 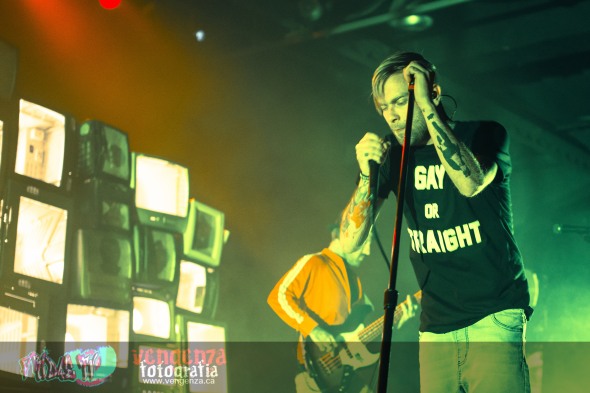 McCracken jumped around enjoying the love and positive vibes from the crowd. First track of the twelve tune set was “Cry”, the bands latest single off of the new record. McCracken started strong, vocals were a little jittery when he was jumping around but that is absolutely understandable, its hard to keep a steady tone when your bouncing around. Unlike us critics, perfect vocals are not important to the fans but an unforgettable performance is. The Used definitely delivered a high energy, heartfelt set,  I did notice ballads are not McCracken’s forte as with many alt-rock singers. Regardless, he put his heart and soul into that performance, especially when they played “On My Own”, the second last track of the night. He talked about how music has saved him and how it  saved and continues to save countless more. This is true, music is a therapeutic outlet with benefits for many people. The world would be a miserable and more intolerable place without music. The crowd was singing along to every lyric of every tune, even the new songs! You can’t ask for anything more from McCracken, he did his job very well! I would have liked to see more show guitar, and by that I mean rocking out with the axe! Do some cool shit people will remember, especially if you’re the guitarist playing a medley that includes a cover of Nirvana’s “Smell’s Like Teen Spirit”. It sounded fantastic but visually I was bored and always ended up paying more attention to Bert’s stage shenanigans, full name Robert Edward McCracken aka “Bert”. The rest of the band is: Quinn Allman – Guitar/Backup Vox, Jeph Howard – Bass/Backup Vox and Dan Whitesides – Drums. Best part of the set for me was seeing how the fans, young and old were so mesmerized by Bert’s antics. The setlist was a concoction of new, (they debuted the song “Revolution” from the just released “Imaginary Enemy”) and older tunes like “I Caught Fire”, “Pretty Handsome Awkward” (a crowd favorite), “Taste Of Ink” and of course the closing medley “A Box Full Of Sharp Objects” from the self-titled debut album The Used. That was amazing to my ears, they blended it with Nirvana’s ” Smells Like Teen Spirit” and Rage Against The Machine’s “Killing In the Name” before ending their part in the double bill blast from the new age rock past. Next time they reach Toronto, I will be there! There were two opening bands “Tonight Alive” and “Sleepwave” who we did not reach on time to see. Major thank you to fabulous FridaeTV photographer Joanna for braving the pit solo capturing some great shots and Sarah at Hopeless for always being amazing! 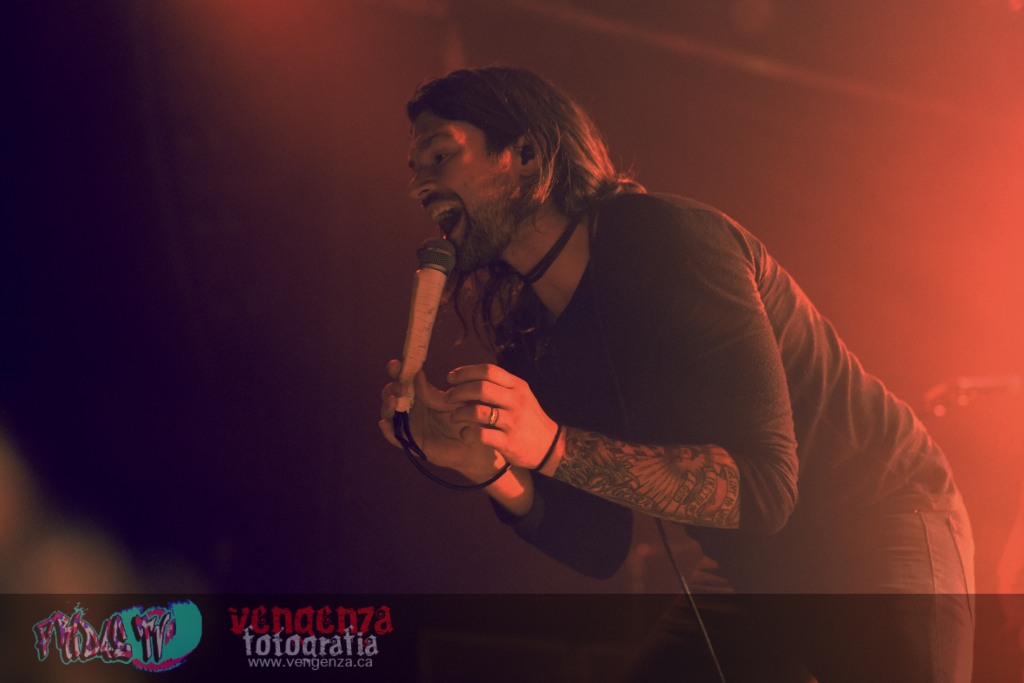 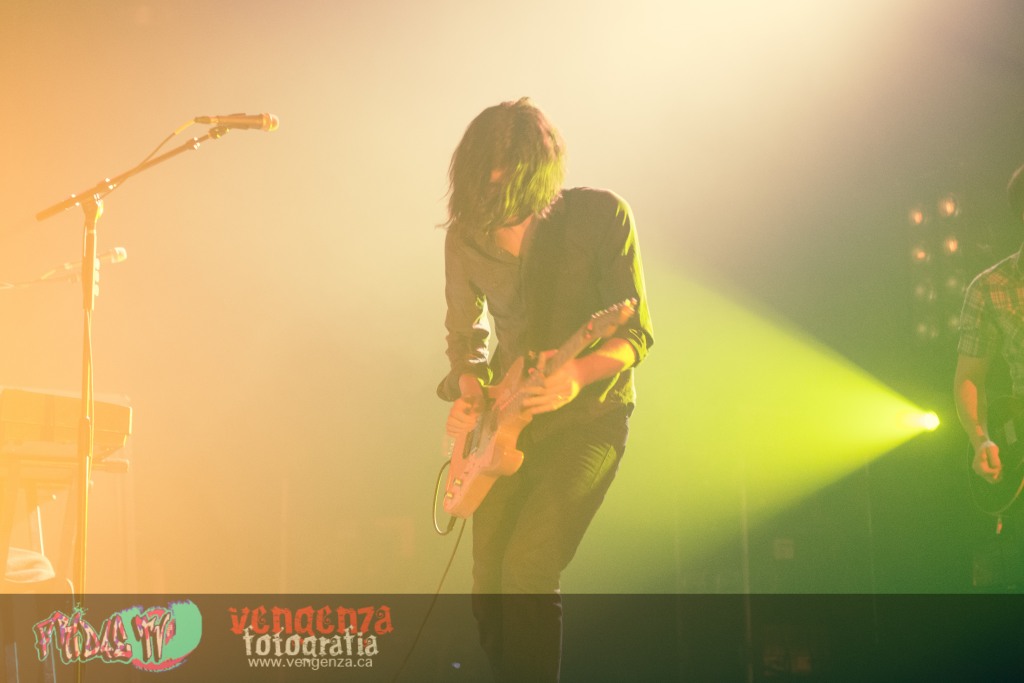 Was very excited to see Taking Back Sunday throw it down, has been a while since I covered any of their live sets. When I first received the press release about new material from the band I was very confused because frontman Adam Lazzara looks completely different from the 2012 Warped Tour set. They kicked off the sixteen tunes with the quirky  “Stood A Chance”, it is the second single off of their newest record “Happiness Is”. The track began and vox was on key but midway through the song it was off, sounding pitchy as fuck and stayed like that for a minute until Lazzara found his vocal balance during the break down. Once he was back in control it was smooth sailing from there. Very sad that I could only stay for a few songs because of a prior engagement that needed my immediate attention. Tried to absorb as much of Lazzara’s trademark mic tossing and hair flipping as I could before my departure. The whole band was rocking out from the first note played, they are; John Nolan – Lead Guitar, Eddie Reyes – Rhythm Guitar, Shaun Cooper – Bass and Mark O’Connell on the skins. I liked that they had Drummer O’Connell within view and not in the dark like The Used’s percussionist Dan Whitesides, who was shoved between the TV’s in the dark.They had a fantastic aura surrounding them as they rocked out to the capacity filled KoolHaus. Even though I saw a few people leave after the Used tore it up, it still looked, felt and sounded like a full house! This isn’t over, FridaeTV has to cover Taking Back Sunday again! According to a close friend TBS closed their set with “Make Damn Sure” from their third record “Louder Now”. As I was exiting the venue, I heard a few fans talking about what an incredible experience it was to see their favorite bands on one stage and how badly they needed to buy a tshirt before leaving. The Co-Headlining tour is still on and most dates are sold out but if you’re lucky to find tickets go! Feed your soul with some quality new school rock and roll! Buy their new records for new ear candy, both of these bands shred the stage and please your ears at the same time! COPYRIGHT © 2014 FRIDAE MATTAS. All Rights Reserved

All Photography (Except first & last) By: Joanna Glezakos  COPYRIGHT © 2014