You heard right! Avenged Sevenfold’s Waking The Fallen: Resurrected will hit the shelves on August 26th – exactly eleven years after the original release of Waking The Fallen! Check out the awesome album trailer at: www.hopelessrecords.com/resurrected 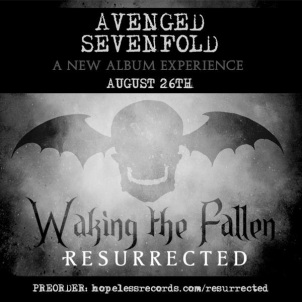 The new release includes 11 never before heard songs, 23 total tracks, new artwork, the original first cut of the music video for “Unholy Confessions” and a 30 minute film featuring never before seen archived footage up to the present day band, directed/edited by Rafa Alcantara.

You can pre-order Resurrected NOW at: www.hopelessrecords.com/resurrected

The special packages and items found here are available only through this pre-order, including the exclusive deluxe version of the CD with two bonus tracks, limited edition 4-disc vinyl LP box set with exclusive 7-inch, Deathbat t-shirt and more. Avenged Sevenfold headline Mayhem Festival tour this summer – trek over to their website for tickets and to see when they’ll be near you!