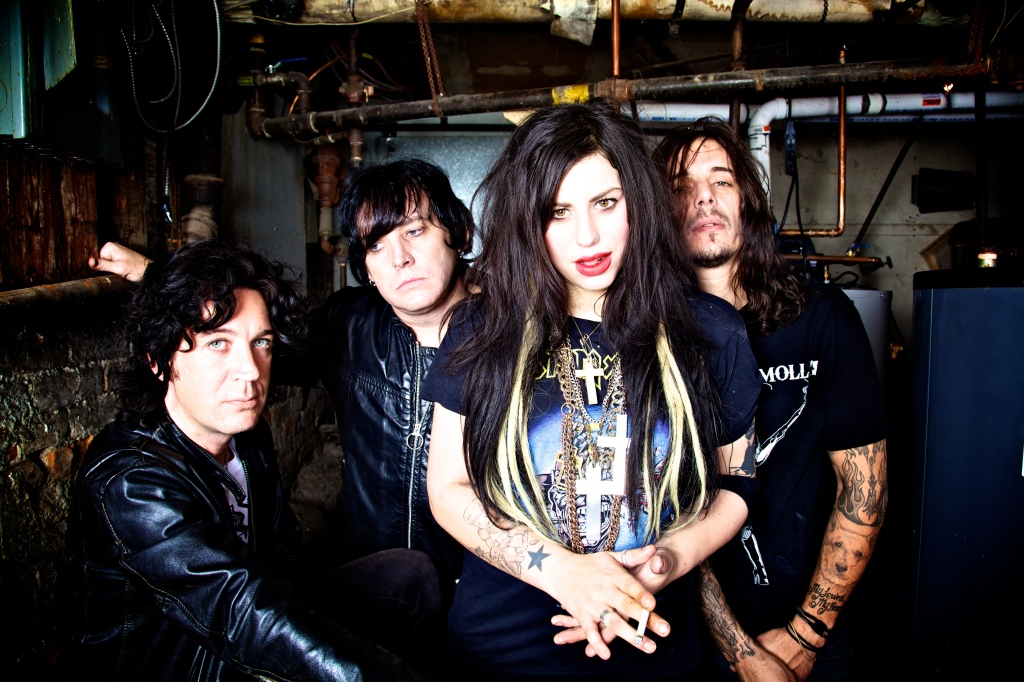 BAND OF THE DAY

Canadian shit disturbers “Die Mannequin” are back with a new “Neon Zero” feel for everyone to groove with! Watch the new video below, read the press release and sooner rather than later you can read my review on the new record. Buy “Sucker Punch” here and keep your ears and eyes open for the new album “Neon Zero” to be released in October!

“Proving people wrong is my favourite pastime,” laughs the singer-guitarist. “I always feel like I have something to prove. It’s kind of in my DNA. I know people have been like, ‘Oh crap, what is Die Mannequin doing?’ Because I haven’t been in the forefront for the last few years. I’ve been regrouping. But now I’m back.”

And back in the gr

oove. Make that a new groove. A neon groove. Neon Zero, the band’s third full-length and their first for eOne Music Canada, finds Die Mannequin not just resurrected but reborn. Rejuvenated. And retooling their wham-bam-thank-you-man punk and guttersnipe metal with an inspired injection of edgy electronics, big beats, massive melodies and polished production. It’s the sound of the mosh pit invading the club floor (and vice versa). The look of a studded leather jacket over a miniskirt and heels. The equivalent of Courtney Love sucker-punching Metric’s Emily Haines and teaching Iggy Azalea the real meaning of a new classic. You need it simpler? It’s an album that puts the DM in EDM. And turns it into Evil Dance Metal.

You could call it a comeback. An evolution. Even a revolution. But you already know what Failure will say about that.

“It’s really just been a natural progression,” she explains. “If it sounds like a big change for people, that’s just because of the years between the last record (2009’s Juno-nominated Fino + Bleed) and now. I’ve been DJing quite a bit over the past few years, and what I do is very contemporary and quite dancey. And I’ve been writing a lot on piano again. I’ve always had so many different influences that weren’t necessarily just rock. But when I started in music I was 14 and 15 and I kind of got stuck in this teenage punk hell of having to play the same songs for 10 years.”

Well, it hasn’t all been hell. Those songs — like Do it or Die and Saved by Strangers (from their EP-compilation Unicorn Steak), not to mention their 2009 top-20 track Bad Medicine — helped Failure and longtime partner-in-grime bassist Tony Bleed crawl their way from underground clubs to arena stages where they’ve opened for dudes named Marilyn and Axl. Along the way, they earned that Juno nom for Rock Album of the Year, along with a nod in the New Group category. But for every high on the rock ’n’ roller coaster there’s a comedown, and Failure has been no exception to the same catalog of professional setbacks and personal indiscretions as countless other fluorescent heroes.

Getting here from there didn’t come easy. But then, nothing good does. And even if it did, Failure doesn’t do easy. For Neon Zero, she spent eight months of madness holed up with co-producers Arion Anderson and Nathan Quinn and mixed by Gavin Brown (Metric, Billy Talent, The Trews) and Lenny DeRose (Metric, Hey Ocean, Walk Off The Earth), sleeping in the studio and painstakingly crafting these tracks — mostly by herself, mostly from scratch. Then she got down to business, bashing and belting out the bulk of the album in an eight-day marathon with Vancouver’s Andrew Conroy. The ends justify her means. The stomping swagger of first single Sucker Punch, the ecstasy and violence of Welcome to the Badlands, the pulsing fuzz of Murder on the Dance Floor, the grind-groove of Knock Me Out, the ominous slow-burn of Pretty Persuasion, the live-for-the-moment anthem We Own the Night, even the tender-hearted neo-balladry of I’m Just a Girl — they upgrade and update DM’s scrawled sonic signature with sharp synths, layered vocals, undeniable grooves. But Diemaniacs needn’t fear the repurposing — it all comes without sacrificing one iota of Failure’s guitar-shredding grit.

“I am such a riffy chick,” she admits. “I can’t help myself. I’m a guitar wanker. There is never enough rock in it for me. I love bands like Sleigh Bells and The Kills, where you have both electronic and rock. That was the whole point, to show you could have it all together. It’s trickier. You have to put more brainpower into it. But when it works, it’s way deep and way more guttural. The music sounds better when you can get it to run hand in hand.”

Now, freed from the shackles of her past, with the most focused, consistent and fully realized work of her career firmly in hand, Failure is ready to run headlong into the future.

“I made this album because I want to kick down doors,” she explains. “I want to be able to really evolve and grow as an artist and not have to do the same old thing again. I don’t want to have to play by the rules. That’s why I needed to do this.”