Words are flowing with ease because now I can breathe and actually focus on writing this editorial. The photos I shot were lost and I was trying to recover them somehow, finally mission is accomplished and they’re all edited. I was very happy that long time FridaeTV photographer Joanna made it to shoot a bit of the last two sets. There was to be four bands on the bill but apparently “Devil You Know” had some car troubles and did not make it to Toronto for the set. Was looking forward to seeing them perform but shit happens! Before we get into the meaty part of the editorial I must say if you don’t know who Lacuna Coil is I suggest you listen to a few tunes and then come back to read the rest of this review.

The first band on stage at The Opera House was Incura originally from Alberta and now transplanted to Vancouver. The band was support for the Canadian leg of the tour and I was so glad I made it to catch their set! Last time I saw Incura rock out was at Canadian Music week…I think? Who knows I could be lying, it’s been a while! Regardless, I don’t get tired of watching them play their hearts out on stage. I wish the Opera House would add some front lighting and not just backlighting always drowning out the performers. 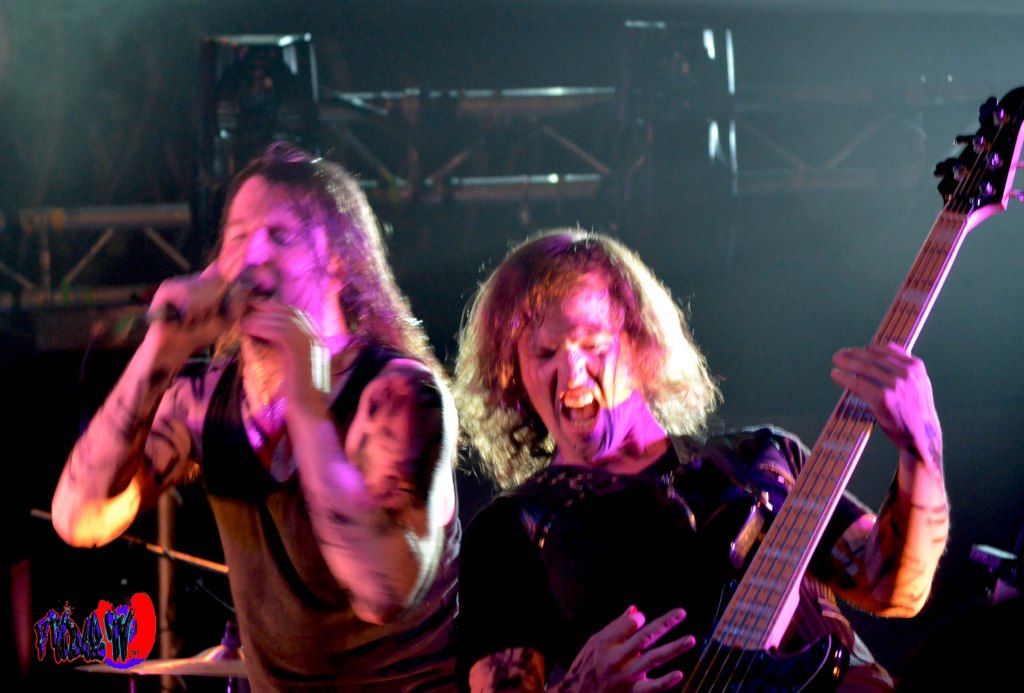 It’s always a challenge to shoot at that venue but at least there was a barricade and mini pit to shoot from, very rare for the Opera House. Kyle Gruninger is the epitome of what a lead vocalist is, he actually sings the bands original material without all the bells and whistles and performs each track like it’s the last song he will sing…One day, they will be rocking arenas! They had an extended set due to the transportation issues of “Devil You Know” leaving a gap in the line up. The crowd didn’t seem to mind at all, I recognized quite a few tunes “Get The Gun”, “Who You Are”, “Greatest Con” and a few more. The other members in the band are: Phil Gardner – Drums, Jim McLaren – Keys, Jono Olson – Bass and Gatlin Fitzgerald – Lead Guitar. The band was extremely entertaining, every set is better than the last but some improvements still need to be made. McLaren on the Keys needs to be a little more vibrant, he looked bored some of the time and not that into the tunes. I cannot wait to see the next phase of progress for Incura.

Up next was a fresh band for me, Starset from Columbus, Ohio. I was the only one shooting the first two bands and didn’t know what to think when the band emerged on stage with lit space helmets on their head and rocking in black tights. The only one not in costume was lead vox Dustin Bates, the rest of the band Ron DeChant, Adam Gilbert and Brock Richards were glowing.

Starset were very fun to shoot and easy on the ears, I was really liking their tunes especially the catchy single “My Demons” from their debut record “Transmissions”. I will definitely need to check out the full record. The only thing I can think of that this band needs to fix is visual, they had this giant screen with the bands logo on it beside the keyboard. It did look cool for a minute but then got in the way, you could barely see the drummer or the vocalist when he was standing behind it. The music was good, a little much on the electrification of the vocals but I thoroughly enjoyed this band and will hit up another set if they reach Toronto again.

Continuing the trend of not dragging this on let’s chat about the headliners, before there was Evanescence, Lacuna Coil brought the goth metal melodies and vocals back in the early nineties. The one and only Italian GodFathers of Goth Rock Lacuna Coil has had some mild success, I’ve heard the bands music for a long time and when I found out they were hitting Toronto, had to cover them! There are many bands out there that deserve much more success and exposure than the current crop of shitterific mainstream entertainment. All of the bands on this Broken Crown Halo tour are part of group “A” the fantastic bands that should be heard. 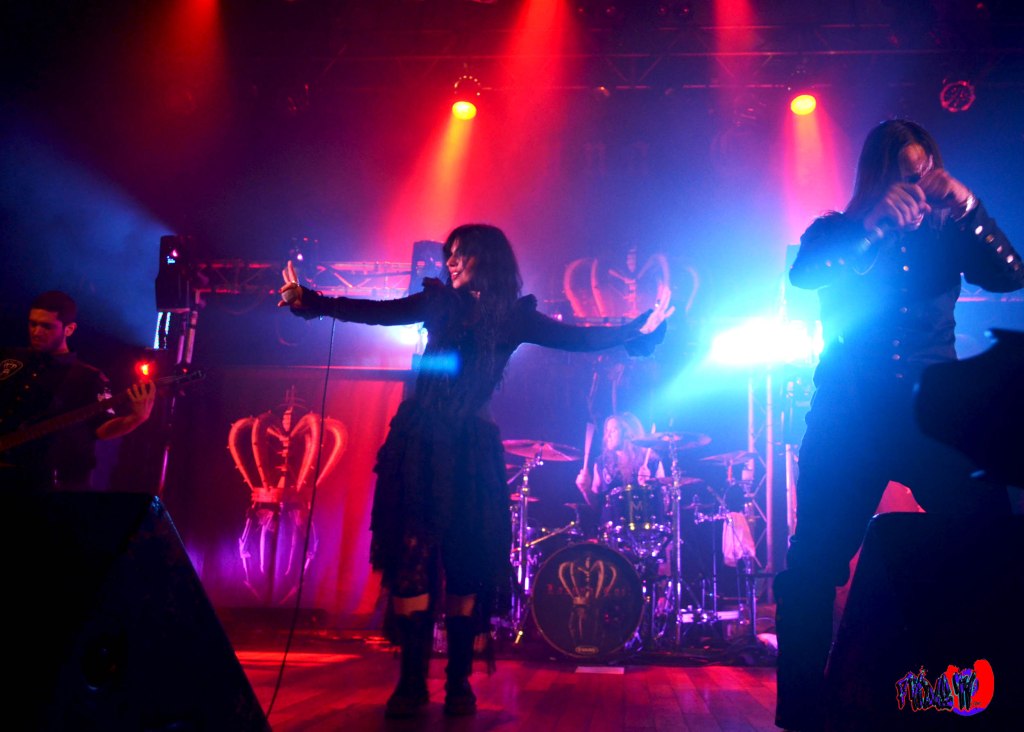 Over the years Lacuna Coil has gained quite a loyal fanbase and not just in Europe, these talented Italianos from Milano have made a name for themselves across the globe. The band is: Cristina Scabbia – Vocals, Andrea Ferro – Vocals, Marco Coti Zelati – Bass, Marco ‘Maus’ Biazzi – Guitars and Ryan Blake Folden on the Drums .

Lacuna Coil had a few cool looking crowns decorating the stage and once they migrated out they we’re greeted with cheers as they kicked off their well blended fifteen track set with big tune Trip The Darkness off of Dark Adrenaline. That tune was soon followed by Spellbound from Shallow Life. Vocals by Andrea Ferro were almost flawless, he gave the people what they wanted…A Performance! I noticed some technical issues with the microphones but Ferro embraced it like a champ. Cristina’s vocals were strong, she sang her heart out and the fans couldn’t get enough, especially when they played Depeche Mode cover “Enjoy The Silence” to end the set. I liked Lacuna Coil’s rendition of the song much better than the original. Maus Biazzi on the axe was beyond incredible those licks were spectacular to hear! The beat was tight thanks to stellar stick handler Ryan Blake Folden and Zelati’s Bass lines were on point. 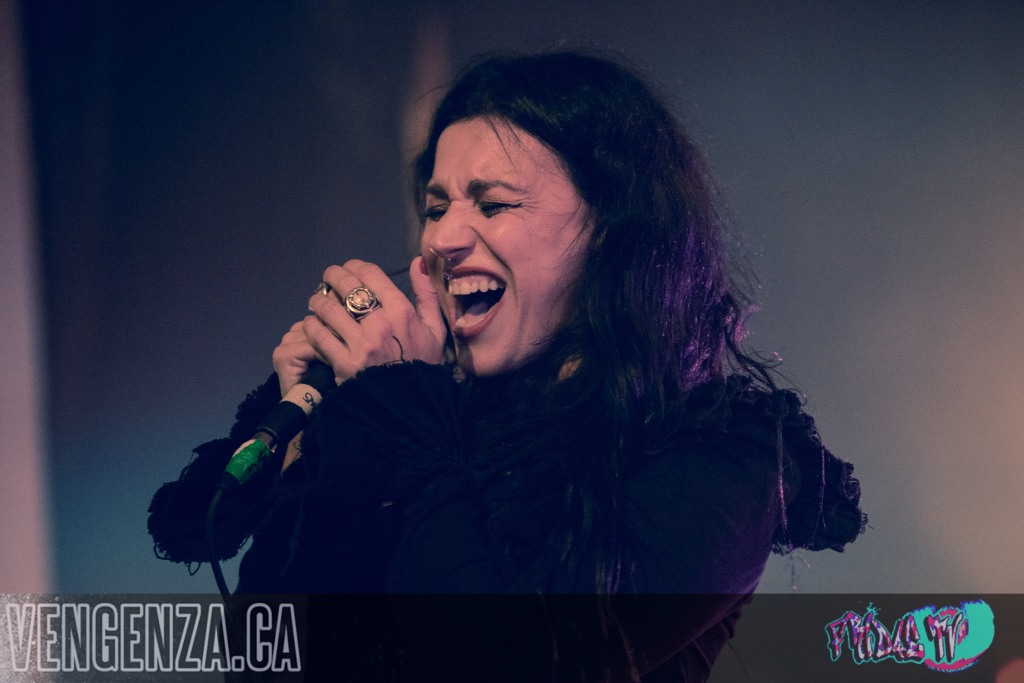 After I shot some photos I was watching the set from behind the soundbooth, the best view in the house! They had some fabulous lighting, still backlit but you must always work with what you have. It was fun to see the bands lighting tech enjoying the show as much as the fans, never seen a crew member so into the music. Rhythmically, he was in sync with every beat the band played and it translated on stage, now that’s passion! I loved watching and hearing the songs I’ve heard on the albums come to life. 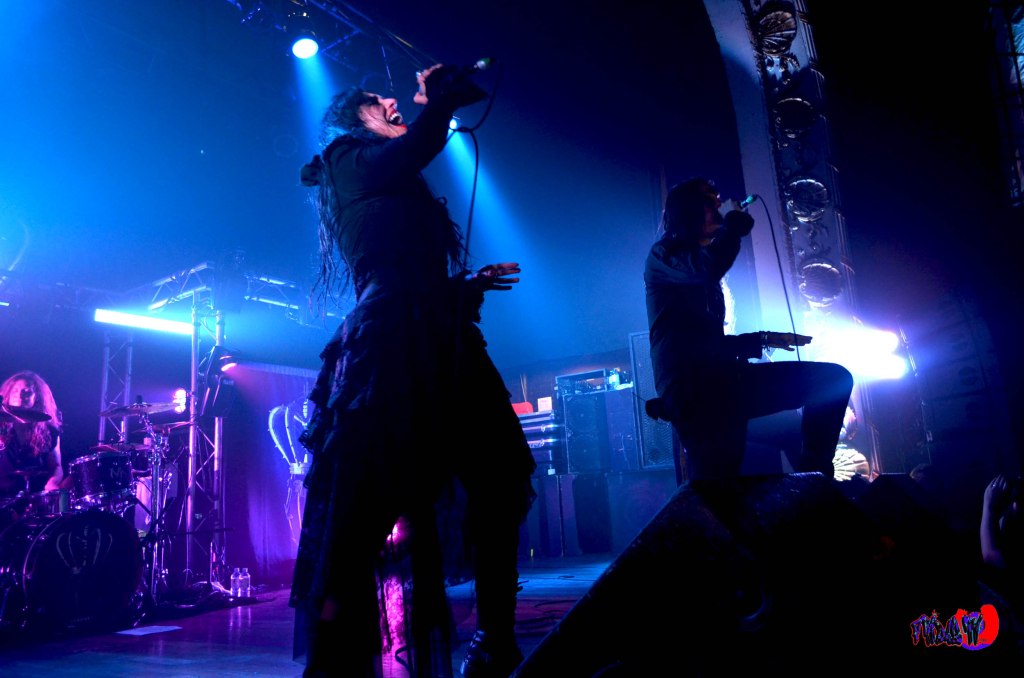 The encore’s were a mix of old and new, first was Nothing Stands In Our Way from the current release Broken Crown Halo and the last tune the band played before lights out was Our Truth off of their album Karmacode. Huge thank you to Jon who linked it up and Lacuna Coil for having me! I enjoyed myself and will be seeing all of these bands again at some point in the future. 5 music notes out of 5 ♪♪♪♪♪ for each band, Lacuna Coil, Starset and Incura are all worth your time and support!