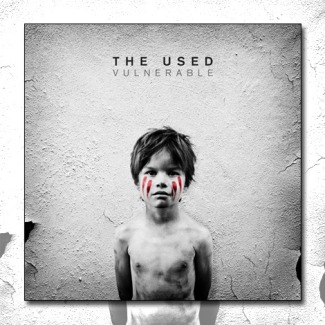 March 27, 2012 – Today The Used have released their 5th studio album, Vulnerable off their own record label Anger Music Group partnered with Hopeless Records HERE.  In conjunction with the new album release, the band has announced a headlining tour kicking off May 12th with Dead Sara and Stars In Stereo.  The band will also play Main Stage on this summer’s 2012 Vans Warped Tour and be doing a select amount of acoustic shows starting today.

Turning personal adversity into art is The Used’s trademark and Vulnerable was a record that simply had to be made. It marks a particular triumph for singer Bert McCracken, who is now reenergized after suffering a broken hand and elbow last year, falling from a stage in Orange County, Calif., and then spending four months getting surgery and recuperating. The experience partially birthed the title and concept of Vulnerable.

“Me feeling that vulnerability kind of sparked this creative fire inside of me,” says McCracken. “This record’s really about becoming more than just who you are, and allowing yourself that vulnerability to be a more powerful person. It’s a lot more positive than a lot of records we’ve written in the past. I think everyone could use some positivity nowadays.”

The Used—which also includes guitarist Quinn Allman, bassist Jeph Howard and drummer Dan Whitesides formed in Orem, Utah in 2001, signing to Reprise Records that same year. Championed by producer and collaborator John Feldmann, the band issued their gold-certified Self-Titled debut in 2002, quickly cementing the Used as leaders among the post-hardcore elite, thanks in part to unforgettable singles like “Box Full of Sharp Objects,” “The Taste of Ink” and “Buried Myself Alive.” The band then released the CD/DVD combo Maybe Memories in 2003, now certified platinum, featuring B-sides, live cuts, demos and unreleased tracks, while still another gold record followed—2004’s In Love And Death—spawning singles “Take It Away,” “All That I’ve Got” and “I Caught Fire.”

2007’s Lies For The Liars, hit #5 on the Billboard Top 200, led to 2009’s Artwork, which peaked at #10 on the Billboard Top 200. As if that weren’t enough to keep a band busy, since 2001 the Used has also destroyed countless stages the world over, touring with a who’s who of modern rock and heavy music contemporaries, and have been featured acts at major festivals like Warped Tour, Taste of Chaos, Ozzfest, Projekt Revolution and the UK’s Reading and Leeds festivals.

“I think Vulnerable is really new for us. There’s a lot of hip-hop influence, beats and drum and bass kind of stuff, but it’s also still a Used record, by all means,” explains McCracken. “Just like any other Used record, it’s a horse of many colors: There are a lot of soft and heavy sounds, there are a lot of brutal, sharp, bright sounds, and the tempos are anywhere from ultra-slow to super fast and heavy. There are a lot of different conceptual feelings on the record.”

“This record is for all those people who weren’t the coolest people around. We never were. This record’s for kids like us, who just love music, because it saves their lives every day,” McCracken says. “At the end of the day, I’m the only one who has to live and die with myself. I want to make it a good one for me. I only have one life to live.”

For Warped Tour Dates and more information on The Used, check out: www.TheUsed.net